Bitcoin is testing an area of interest visible on the 4-hour time frame as it consolidates around a former support turned resistance level. Note that price also broke past the neckline of a double bottom pattern to signal that an uptrend is in the works.

Price might be in for a climb that’s around the same height as the reversal formation, which spans $3,200 to $3,800. However, the 100 SMA is still below the longer-term 200 SMA to indicate that the path of least resistance is to the downside. In other words, there’s still a stronger chance for the selloff to resume than to reverse.

Bitcoin also has to test the 200 SMA dynamic inflection point around the $4,100 area before heading further up. From there, the next area of interest might be at the $4,400 resistance that held since last month.

RSI is already in the overbought zone to signal that buyers are tired and that sellers might take over. The oscillator needs to turn lower in order to signal a pickup in selling momentum. Stochastic is also dipping into the overbought region to indicate that buyers are feeling exhausted and may let bears take control. In that case, bitcoin could still fall back to the bottoms. 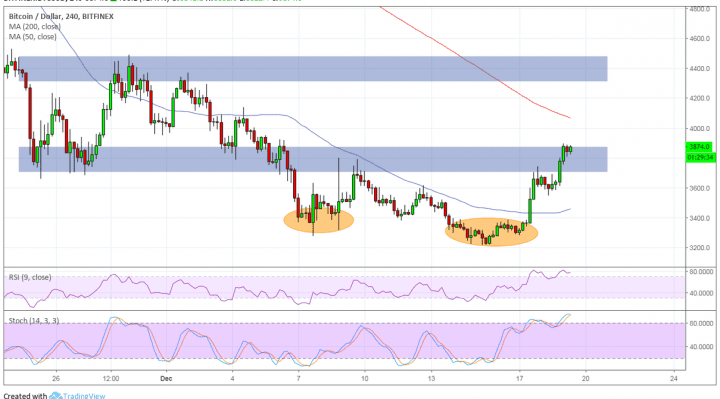 Bitcoin has been holding its own quite well over the past couple of trading days, buoyed by a number of positive factors. First there’s the introduction of crypto to crypto trading by Coinbase that could boost volumes as more traders are encouraged to pit various altcoins against each other.

Next there’s the update that Mark Dow, the former IMF economist that took a huge short position on bitcoin after it peaked around the same time last year, has closed his remaining position. Also, the increased coverage on the recent rally might be drawing more bulls to reopen their positions, thereby fueling more gains.