Bitcoin is consolidating inside its symmetrical triangle pattern and is currently testing support. A bounce off this area could take bitcoin back to the triangle top at $4,200 while a break lower could mean longer-term losses.

The 100 SMA is below the longer-term 200 SMA to signal that the path of least resistance is to the downside. In other words, support is more likely to break than to hold. In that case, bitcoin could slide by the same height as the triangle, which spans $3,600 to $4,800.

RSI seems to be heading lower to signal that sellers have the upper hand, but the oscillator is also hovering close to the oversold region and may already be pulling up. If so, this indicates that buyers are eager to return and defend support zones.

Stochastic is also turning higher after recently dipping into the oversold region, indicating that bullish pressure is about to return. A bit of bullish divergence can be seen as price made higher lows while stochastic had lower lows. Price would need to bust through the moving averages’ dynamic inflection points to indicate a pickup in bullish momentum. 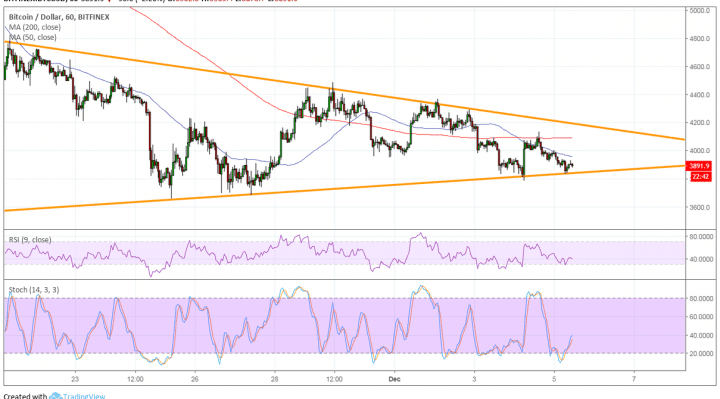 Bitcoin can’t quite shake off the downbeat vibes that are weighing it down over the past few weeks. Although it enjoyed a bit of a reprieve a few days back thanks to revived expectations of institutional inflows, bulls seem to be holding out for actual developments before sustaining the climb.

Still, a lot of analysts are holding on to their bullish forecasts for bitcoin, even as some have pushed back their timeline for a rebound. From expecting a big bounce before the end of the year to the first quarter next year, many are now waiting for a recovery later on in 2019. In any case, actual evidence that institutional inflows are kicking in might be enough to shore bitcoin higher sooner or later.