Bitcoin has closed below the bottom of its falling wedge formation to signal that bears have won over and that further declines are possible. However, there are a couple of nearby support areas that might draw some bullish pressure.

Price is approaching the area of interest around $4,500 which previously held as resistance in September last year. A break below this could pave the way for a slide to the resistance turned support at $3,000. The 100 SMA is below the longer-term 200 SMA to indicate that the path of least resistance is to the downside or that support is more likely to break than to hold.

Stochastic is still heading lower and has some room to fall before indicating oversold conditions. This suggests that sellers could stay in the game for a bit longer before buyers are able to return. Once the oscillator starts climbing again, price might follow suit. RSI is also in the oversold territory to reflect exhaustion among sellers but has yet to pull up to signal that buyers are regaining control. 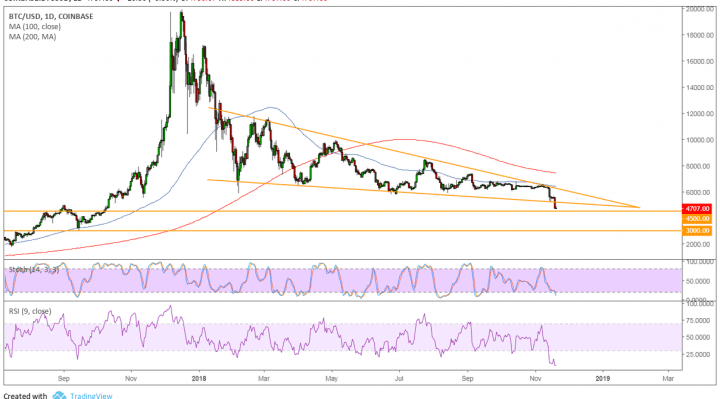 Bitcoin’s slide is being blamed on the uncertainty surrounding the Bitcoin Cash hard fork and also on the SEC announcement regarding ICO operators in violation of securities laws. This added to the FUD sentiment prevailing in the cryptocurrency market, thereby leading to another leg lower for bitcoin and its peers.

This has also dampened hopes for a strong surge in institutional investment as traders might also be discouraged from putting funds in bitcoin while it is dropping. However, it’s also hard to imagine any kind of near-term catalyst that might inspire a big bounce as analysts are now warning that it could take months to undo the recent price slide.