Bitcoin was able to bust through the top of its range visible on the 4-hour chart but has since pulled back for a retest. A bounce has yet to take place as it tests the area of interest, but a continuation of the climb could take price up to the Fib extension levels marked below.

The moving averages are still oscillating but it looks like the 100 SMA is safely above the longer-term 200 SMA to signal that the path of least resistance is to the upside. Also, these moving averages might hold as dynamic support around $6,500-6,600 in the event of a larger correction. A break below this area could send bitcoin back to the range support around $6,200.

Stochastic is slowly moving south to show that sellers still have the upper hand but are slowly losing momentum. RSI is just making its way down from the overbought zone to suggest that bears have a bit more time to stay in control as the oversold region is far away. 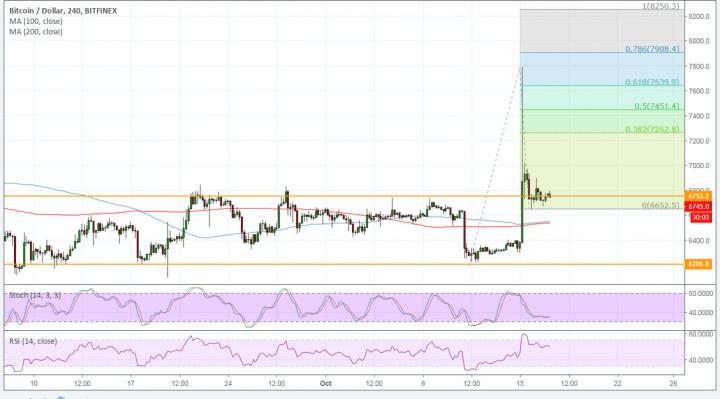 Although the sharp break higher was spurred by the Tether selloff and investors moving funds to the negatively correlated bitcoin, many believe that it’s Fidelity’s launch of an institutional investment platform for bitcoin that could sustain gains.

Keep in mind that the SEC is still in its comment period for the bitcoin ETF applications, which were seen to be the catalyst for more institutional money flowing into bitcoin and ushering in a strong rebound before the end of 2018. However, it may be the availability and accessibility on Fidelity that supports volumes and activity from here.