Bitcoin could be prime for an uptrend as it broke above the neckline of a double bottom on the 4-hour chart. Price is in the middle of a pullback to this broken resistance, though, and holding as support could allow the uptrend to gain traction.

Applying the Fib tool on the latest swing low and high shows that the 38.2% level lines up with the area of interest around $15,000. This is also close to the 200 SMA dynamic support. However, the 100 SMA is below the longer-term 200 SMA so the path of least resistance is to the downside.

Stochastic is also on the move down to confirm that sellers are in control, but the oscillator is already dipping into oversold territory to suggest that selling pressure could fade. RSI has more room to fall, so a deeper correction might still be in the cards. A break below the 61.8% Fib or $14,000 level could lead to a drop to the swing low or a continuation of the downtrend. 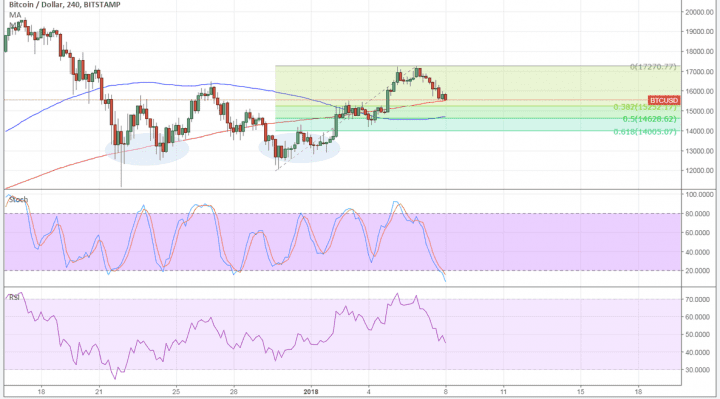 Bitcoin is still under some pressure from the push for regulation in several nations, particularly in South Korea. This has taken its toll on bitcoin volumes and activity lately. Traders also appear to have a stronger appetite for cheaper altcoins and for US equities that are enjoying record highs due to the tax reform package.

Disappointing jobs data from the US last week could weigh on the currency’s gains, though, as this dampened hopes of a more aggressive pace of Fed tightening this year. The next set of major reports from the US won’t be out until Friday, so the dollar could pay attention to remarks from FOMC voting members in the days ahead. CPI and retail sales will be released at the end of the week, and downbeat inflation readings could further douse tightening hopes.