Bitcoin recently broke below its short-term ascending trend line to indicate that a reversal is underway. Price appears to be stalling around $6,265 and a bounce could take it up to the nearby resistance levels.

The Fibonacci retracement tool shows which levels in particular could keep gains in check. A shallow pullback could last until the 38.2% level at $6,483 before resuming the drop to the swing low or lower. A larger correction could make it all the way up to the 61.8% level or $6,619, which lines up with the moving averages and is near the broken trend line.

On the subject of moving averages, the 100 SMA is above the longer-term 200 SMA for now but the gap has narrowed to signal an imminent downward crossover. In that case, bearish momentum is just about to pick up and allow the selloff to regain traction.

However, RSI is starting to crawl out of the oversold region to signal a return in bullish pressure. Stochastic, on the other hand, is starting to turn lower without hitting overbought levels. This means that sellers are eager to return and might even push for a break of the swing low soon. 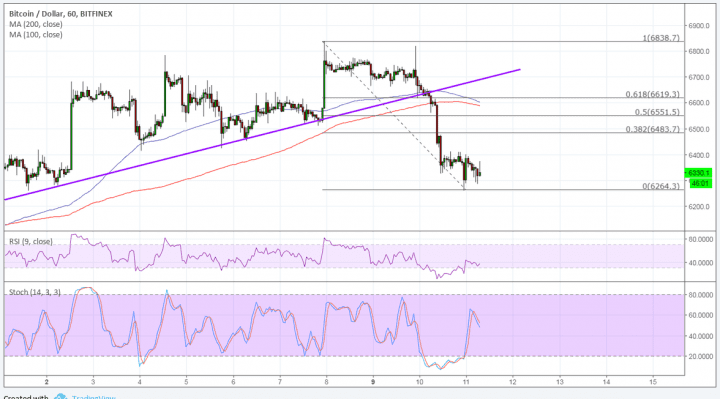 Bitcoin was unable to sustain its roaring start for the quarter as comments from well-known American economists Stiglitz and Roubini weighed heavily on sentiment. It does not help that trade war jitters are returning, dampening appetite for riskier assets like cryptocurrencies also.

Then again, the dollar could be poised for more weakness if this trade situation escalates. After all, retaliatory measures from China and other trade allies would be aimed at the US and would thereby do most damage to its economy. This might drive traders away from US assets and traditional markets vulnerable to global growth uncertainties, upping demand for alternative holdings like bitcoin instead.