Bitcoin continues to hang around the area of interest visible on the 1-hour and 4-hour charts. Price could be due for another leg lower, though, as a bearish flag appears to have formed.

The mast of the flag is around $500 tall so the resulting drop could be of the same height. This could take bitcoin back down for a test of the range bottom. The 100 SMA is starting to cross below the longer-term 200 SMA to suggest that the path of least resistance is to the downside.

RSI appears to be crawling higher as it makes its way out of the oversold region, though, so there may be some buying momentum left. However, the oscillator also seems to be hesitating on its climb.

Stochastic has already started to make its way down without even hitting overbought levels. This suggests that sellers are eager to return and push bitcoin price down. 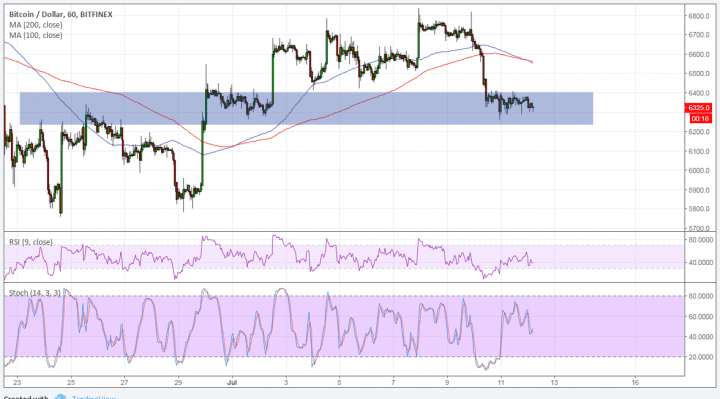 Bitcoin is struggling to sustain its strong start for the quarter as the cryptocurrency was dragged down by negative commentary from well-known economists. Apart from that, the return of risk aversion on trade tensions also dampened demand for riskier assets these days.

In contrast, the US dollar is able to benefit both from safe-haven demand and economic strength. The latest set of reports led traders to price in upbeat CPI expectations later this week, which would likely fuel Fed tightening expectations.

It also helped the dollar’s cause that formerly dovish FOMC member Evans acknowledged the positive developments that could keep the central bank on track to hiking one or two more times this year. He noted that fiscal policy has been supportive of growth, possibly even enough to keep the US economy strong despite trade uncertainties.

Meanwhile, bitcoin continues to hold out for stronger catalysts in order to determine its direction.