Bitcoin has formed higher lows and found resistance at $6,800 to create an ascending triangle pattern on its 4-hour chart. Price is currently testing support and might be due for a move back to the top.

In addition, the 100 SMA is crossing above the longer-term 200 SMA to signal that the path of least resistance is to the upside. This basically means that bullish momentum is coming into play and support is more likely to hold than to break. In that case, bitcoin could move back up to the triangle resistance or even attempt an upside break.

However, RSI is approaching overbought levels to signal weakening bullish momentum. Turning lower could bring sellers back in and lead to another dip to support.

Similarly stochastic is already indicating overbought conditions and might be ready to move back down soon, so bitcoin could still attempt a break below support. In that case, bitcoin could fall by around the same height as the chart pattern, which is around $1,000 tall. 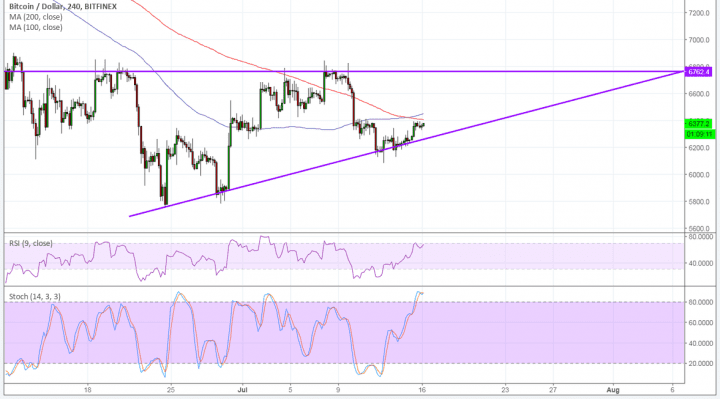 Bitcoin has had some trouble holding on to its gains from the beginning of the quarter as negative remarks from well-known economists and a hack on Bancor revived investor concerns. At the same time, dollar strength also proved tough to contend with, weighing on BTCUSD for the most part of last week.

This time, it would take a set of positive developments to renew investor confidence, although it seems that buyers are keen on defending current levels. A move past the triangle top could also mean a longer-term climb, as it would also complete the inverse head and shoulders on the daily time frame.

The US retail sales report is the only top-tier catalyst for the dollar on the economic calendar, but of course trade-related updates could push sentiment around.