Bitcoin is currently testing the neckline of its inverse head and shoulders pattern, and a breakout could confirm a bullish reversal. Price has completed the right shoulder and using the Fib extension tool on this move shows the next upside targets.

Price is at the 61.8% extension at the moment but stronger bullish momentum could take it up to the 78.6% extension at $6,900. The full extension is located at $7,127.50 which might be the first upside target for this rally.

The chart pattern is approximately $1,000 in height so the resulting uptrend could take it up to $7,800 or higher. The 100 SMA has just crossed above the longer-term 200 SMA to signal that the path of least resistance is to the upside. This basically means that there’s a strong chance for the bullish run to gain traction.

However, RSI has reached overbought territory to indicate that buyers are feeling tired at this point. Profit-taking could ensue and lead to another dip to nearby support levels. The moving averages could continue to hold as dynamic inflection points. Stochastic is also indicating overbought conditions and may turn south, so bitcoin could follow suit. 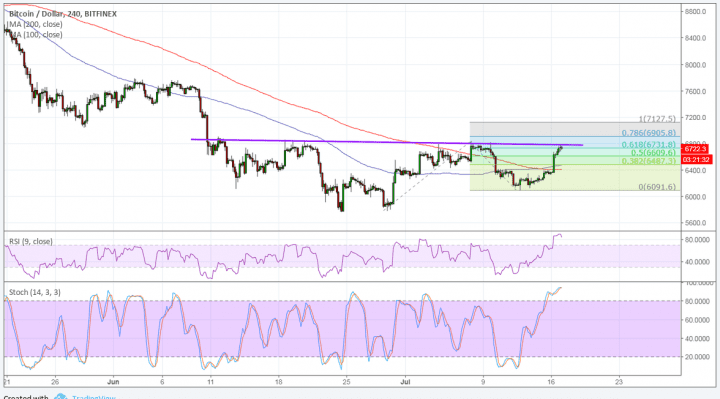 Sentiment is strongly positive so far after it was confirmed that BlackRock, the world’s largest asset management firm, formed a team to look into investments in the cryptocurrency industry. However, CEO Larry Fink clarified that they are not seeing strong crypto demand from their clients yet. This represents a turnaround from his earlier bitcoin stance and signals institutional interest in the space.

Still, this was enough to bring bitcoin back to levels prior to the selloff when negative remarks from economists came out last week, along with the hack on Bancor. This could be enough to sustain optimism that the industry could see more developments and stage a strong rebound until the end of the year.