Bitcoin is holding on to its gains and has been able to make its way to the top of the ascending channel on its 4-hour chart. However, resistance appears to be holding so bitcoin could use a pullback to gather more bullish energy.

Using the Fib tool on the latest swing low and high shows that the 61.8% level is closest to the channel bottom and a former resistance level at $6,700. If it holds as support, bitcoin could bounce back up to the swing high or the channel top closer to $7,800.

The 100 SMA recently crossed above the longer-term 200 SMA to signal that the path of least resistance is to the upside. This confirms that the uptrend is more likely to resume than to reverse. In addition, the moving averages are close to the channel bottom, adding another layer of support at the dynamic inflection points.

RSI is turning lower after hitting overbought levels, indicating that selling pressure is picking up. Stochastic is also pointing down and signaling bearish momentum. Both oscillators have plenty of room to slide before hitting oversold levels, so sellers could stay in control for a while. 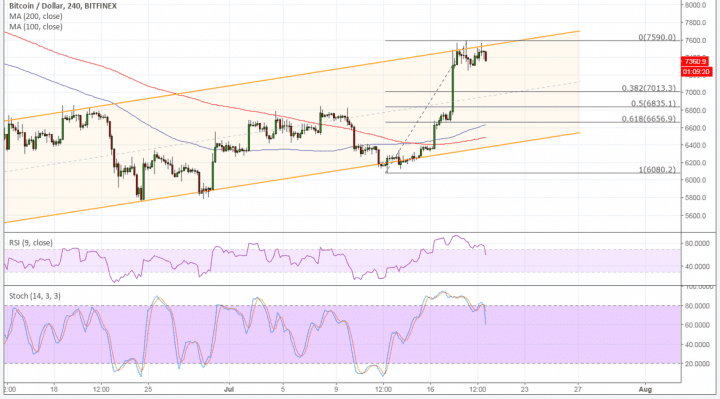 Bitcoin is also seen to be forming a bullish flag at current levels, and this is often seen as a continuation signal. With that, a break higher could be followed by a rally that’s the same height as the flag mast.

Cryptocurrencies have had a good run so far this week, buoyed by positive sentiment stemming from a potential pickup in institutional interest. It has been reported that the likes of BlackRock are looking into investing in the space, and retail traders didn’t want to get left behind on the rallies.

At the same time, the dollar has lost some ground on Trump’s remarks criticizing the Fed for tightening and nullifying the administration’s fiscal policy progress and US growth.