Bitcoin appears to be climbing past the top of its descending triangle on the daily chart, signaling another bullish move. However, the resistance at the shorter-term rising channel could inspire a quick pullback.

The 100 SMA dynamic inflection point also seems to be holding as resistance for the time being. This moving average is below the longer-term 200 SMA to confirm that the path of least resistance is to the downside or that the selloff still has a chance at resuming. In that case, bitcoin could retreat to the bottom of the channel and triangle at $6,500 for another test of support.

A break past the channel top at $7,800, on the other hand, could mean a test of the 200 SMA dynamic inflection point next. From there, strong bullish pressure could take bitcoin up to the triangle top close to $13,000.

However, RSI is already indicating overbought conditions, which means that buyers are exhausted at this point and may be looking to book profits. Similarly, stochastic is in overbought territory and turning lower could bring sellers back in. 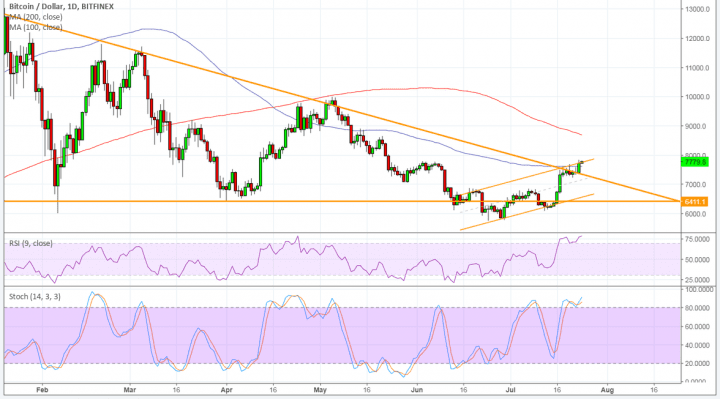 Bitcoin is dominating the cryptocurrency rankings once more as it climbed roughly $1,000 in a span of a few days. This has led to FOMO among market watchers, further fueling gains.

The spotlight is now on the SEC for its decision on the bitcoin ETF request by SolidX. Approval could bring more gains for bitcoin price, although this could also bring in more short interest. Still, the pickup in accessibility and liquidity would mean more volatility for this particular cryptocurrency.

On the flip side, the dollar has actually been on stronger footing so far this week, as traders anticipate a strong advance GDP reading later on. There have been rumors that it could come close to 5% which would mean stronger tightening expectations and a good chance that it could surpass trade-related uncertainties.