Bitcoin is still on its bullish run and has been able to climb all the way up to the $8,500 levels. Price appears to be hitting resistance here, though, so a correction may be due before the rally resumes.

Applying the Fibonacci retracement tool on the latest swing low and high shows that the 50% level is close to the rising trend line connecting the lows since last week. This would be around the $8,000 major psychological level where buy orders could be waiting.

This also lines up with the 100 SMA dynamic inflection point, which is above the longer-term 200 SMA to confirm that the path of least resistance is to the upside. In other words, the uptrend is more likely to resume than to reverse. A larger pullback could dip to the 200 SMA dynamic support, but this might be the line in the sand for this climb.

RSI is turning lower to signal that sellers are regaining control while buyers take a break or book some profits at current levels. Stochastic is also pointing down to indicate a return in selling pressure. Buyers could jump back in once both oscillators hit oversold levels and turn back up. 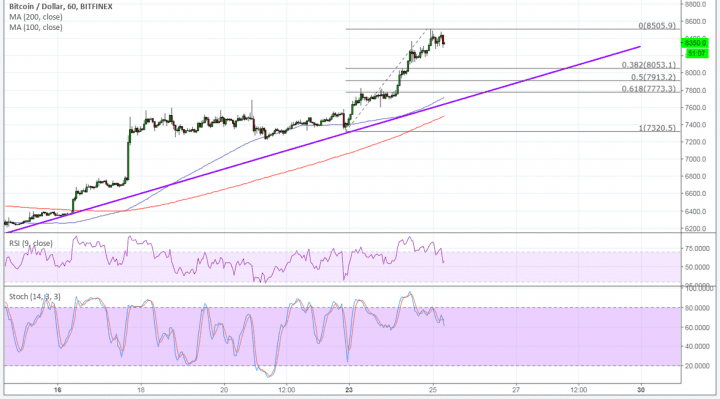 Traders are currently awaiting the SEC decision on the bitcoin ETF as this might mark a big step for the industry or at least this particular digital asset. Recall, however, that the introduction of bitcoin futures last year was being blamed for the sharp drop in prices as this opened bitcoin for selling interest.

So far, the developments have been mostly upbeat as traders continue to bank on the pickup in institutional interest. Last week, it was confirmed that BlackRock formed a team to look into investment opportunities in the space, which suggests that other funds might also be interested. This could bring an influx of liquidity and volumes, which might continue to sustain the industry and the bull run.