Bitcoin continues to trend higher but might need to pull back from its rally to gather more bullish energy. Applying the Fibonacci retracement tool on the latest swing low and high shows that the 50% level lines up with a short-term rising trend line near the $8,000 major psychological mark.

This is also around the 100 SMA dynamic inflection point, which adds to its strength as support. The shorter-term moving average is also above the 200 SMA to signal that the path of least resistance is to the upside. This basically means that the uptrend is more likely to resume than to reverse.

A deeper pullback could last until the 200 SMA dynamic inflection point, which lines up better with a former resistance level. This might also be the line in the sand in a correction, as a break below this could spur a test of the swing low and perhaps a continuation of the drop.

Then again, RSI is on its way up so bitcoin could follow suit while buyers have the upper hand. Stochastic is also on its way up and halfway through the overbought region. Reaching this area and turning lower could bring sellers back in. 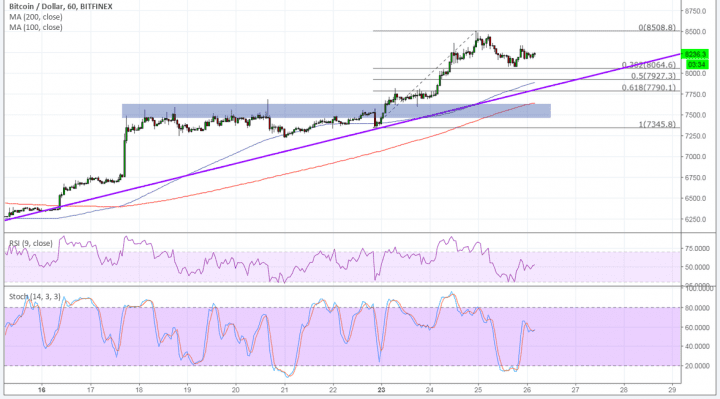 For now, it looks like the 38.2% Fib is already keeping losses at bay, possibly sending bitcoin back to the swing high around $8,500 or higher. The gap between the moving averages has slightly narrowed, though, so bullish momentum may be slowing.

Bitcoin traders appear to be holding out for another set of positive catalysts to sustain the climb. The attention is on the SEC decision on the bitcoin ETF for SolidX, as approval could bring an influx of liquidity and activity for the digital asset.

Keep in mind, however, that the introduction of bitcoin futures on CME last year was being blamed as the culprit for the prolonged slide that followed.