Bitcoin is up to the last pullback point on its daily time frame as it tests the 61.8% Fib retracement level and 200 SMA dynamic resistance. If this keeps gains in check, price could still resume the drop to the swing low or any nearby areas of interest.

Note that the 100 SMA is below the longer-term 200 SMA after all, so the path of least resistance is to the downside. In other words, there’s still a chance for the selloff to resume from here. Then again, the gap between the moving averages is narrowing to signal weakening bearish pressure.

In addition, a bullish pennant can be seen right at the current levels and this is often considered a continuation signal. A candle closing above the $8,300 level could be enough to signal that bulls are returning.

However, RSI is indicating overbought conditions and may be ready to turn back down. This could bring bearish pressure back in and lead to a small dip to the nearby support zones, one of which is the 100 SMA dynamic inflection point. Stochastic is also hovering at overbought territory to indicate that buyers are feeling exhausted and may just book profits at this level. 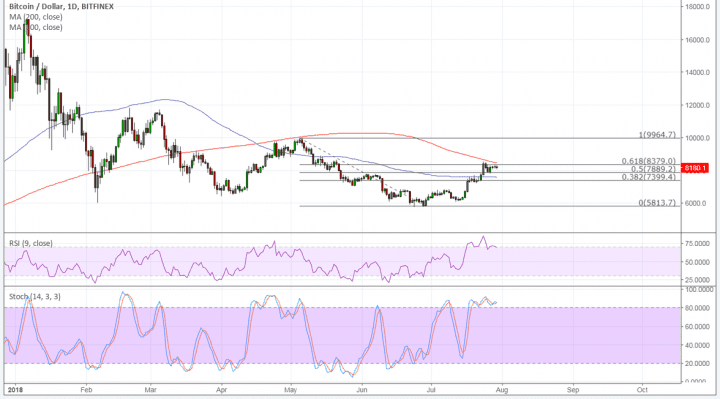 Bitcoin appears to be running out of steam on its rallies as investors await further positive catalysts. While the reports on increased institutional interest and the anticipation for the SEC decision on bitcoin ETF applications were enough to prop prices up, it seems that it would take another round of updates to sustain the climb.

It doesn’t help that the SEC delayed their decision on a number of the ETF applications while denying the one from the Winklevoss twins. This suggests that there’s a lot of work to be done before this type of financial instrument is able to draw more liquidity and activity from retail investors.