Bitcoin is inside yet another short-term ascending channel, but if the previous breakdown is any indication, the downtrend could still be set to resume soon. Price is trading below a longer-term descending trend line that’s been holding since last month, after all.

Besides, the 100 SMA is below the longer-term 200 SMA to signal that the path of least resistance is to the downside. This indicates that the selloff is more likely to resume than to reverse. The 100 SMA is also in line with the trend line to add to its strength as resistance.

RSI is on the move up, though, so buyers could still have enough energy for an upside break. However, bitcoin could encounter another roadblock at the 200 SMA dynamic inflection point around $7,400.

Stochastic is also heading higher to signal the presence of bullish pressure but is approaching the overbought area to signal exhaustion. If sellers take over while buyers take a break, the drop could resume to the latest lows near $6,000. 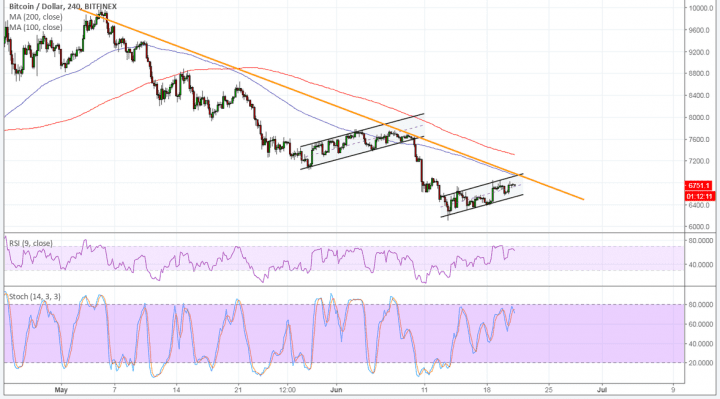 It is worth noting, however, that the mood in the cryptocurrency industry has been gradually improving. This might have been spurred by remarks from a senior SEC official who noted that ethereum and bitcoin are not securities that should be subject to regulation like stocks or bonds.

It also helps that there are reports debunking the idea of Tether being used to manipulate bitcoin prices last year. This eases fears of many investors while US regulators continue to investigate into price manipulation practices and have yet to release their results.

This may have helped bitcoin stay more resilient in reaction to the Bithumb hack, which led to the loss of millions’ worth of cryptocurrencies. The reaction was relatively muted and short-lived compared to the one on Coinrail’s hack a few days back, even as this smaller exchange noted that only lesser-known altcoins were affected.