Bitcoin has formed lower highs and higher lows to create a symmetrical triangle pattern on its 4-hour time frame. Price is bouncing off the bottom and might be due for a test of the resistance.

However, it would need to break past the nearby area of interest before gaining more upside momentum. the former support around the $9,500 to $10,000 level could hold as resistance from here and send bitcoin back to the triangle support or lower.

A downside break could lead to a drop of around $7,000 or the same height as the triangle formation. Similarly a break past the resistance around $11,000 could lead to a climb of $7,000.

The 100 SMA is below the longer-term 200 SMA to signal that it’s more likely for a downside break to happen, though. The 100 SMA also appears to be holding as dynamic resistance for the time being.

Also, stochastic is in the overbought territory to indicate that buyers are starting to feel exhausted. Turning back down could draw sellers back in. RSI has some room to climb so a test of the triangle resistance could happen first before the oscillator hits overbought conditions and also turns back south. 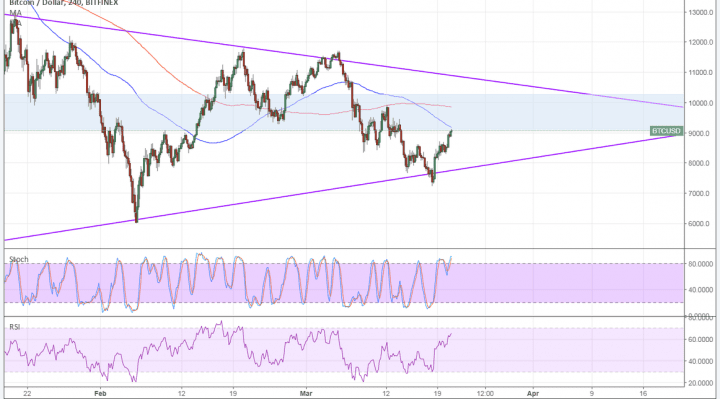 The mood in the cryptocurrency industry has improved recently as the focus has shifted away from regulation news and reports on exchange shutdowns or hacking attacks. There have been no major headlines against bitcoin from the G20 Summit either.

The dollar could be in for more volatility later in the day as the FOMC preps to hike interest rates. New Fed Chairperson Powell will also have his first post-FOMC presser and his views could shape policy expectations and therefore dollar direction for the next few months.

A hawkish hike or one that’s accompanied by optimistic remarks or even an upgrade in economic projections could spur more dollar demand and lead to a downside break for BTCUSD. On the other hand, a dovish hike or cautious remarks could allow cryptocurrencies to keep advancing.