Bitcoin made another upside break from consolidation, signaling its intention to head further north. Price is still hovering around its record highs, still deciding whether to make a bounce or keep pushing higher.

The 100 SMA is above the longer-term 200 SMA so the path of least resistance is to the upside. This means that the rally is more likely to continue than to reverse. The gap between the moving averages is also widening to reflect a pickup in bullish pressure. Also, the 100 SMA lines up with the previous triangle support to add to its strength as a floor in the event of a dip.

An even larger pullback could find support at the longer-term 200 SMA at $7000. Stochastic is turning lower to signal that selling pressure is returning while RSI is heading south as well, so bitcoin might follow suit. 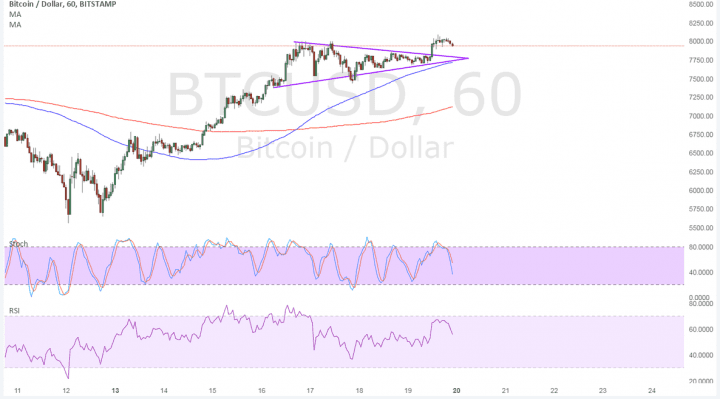 In any case, the cryptocurrency has been able to make a strong recovery since the announcement of the hard fork suspension a few days back. This signals that investors have a lot of faith in the core version as compared to other rival versions like bitcoin cash and bitcoin gold. Besides, these newer versions are also suffering weak network acceptance.

There has been a pickup in geopolitical risk once more as uncertainty in Germany has ticked higher on Merkel’s failure to form a three-way coalition. This could spark another round of elections, which could cloud the outlook for the euro zone’s largest economy.

Meanwhile, the dollar is still under some pressure despite the vote to pass the House version of the tax bill. After all, there are stark differences with the Senate version so it may take a while before cohesive legislation is ready for President Trump to sign and enact. The FOMC minutes are due this week and could also impact dollar price action.