Bitcoin pulled back sharply after recently establishing new record highs at $8290. Price is now retreating to the former resistance close to the $7800 area, which lines up with the 61.8% Fibonacci retracement level.

The 100 SMA is above the longer-term 200 SMA on this time frame so the path of least resistance is to the upside. The gap is also widening to reflect strengthening bullish pressure that could allow the uptrend to resume at some point.

A larger pullback could last until the 200 SMA dynamic support closer to a longer-term area of interest. This might be the line in the sand for the uptrend, though, as a break below $7000 could lead to a drop to the next area of interest at $6000.

Stochastic is still heading south so bitcoin might follow suit while sellers remain in control. RSI is also heading lower to reflect the presence of bearish momentum, but bulls could return once both oscillators hit oversold levels and turn back up. 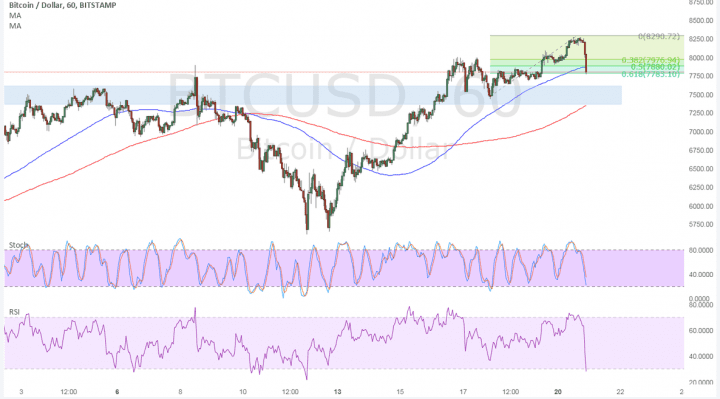 Profit-taking seems to be taking its toll on bitcoin rallies these days as investors might be rushing to pare their risk ahead of the Thanksgiving holidays. Low liquidity during this long weekend could lead to more volatile market conditions in which small positions could still lead to big spikes here and there.

Besides, expectations for the CME bitcoin futures launching by the end of the year have been pared as the group clarified that they haven’t set a date yet since the product is pending regulation. Any setbacks could lead to more unwinding in long bitcoin positions from here.

As for the dollar, positive expectations for the FOMC minutes due later this week are propping the currency higher. December hike forecasts are already very high, so traders are hoping to get more hawkish hints from the central bank for next year’s monetary policy moves.