Bitcoin is still edging higher but is also consolidating inside a rising wedge formation. Price could be due for a breakout anytime soon as it approaches the peak of the formation.

This chart pattern spans $7200 to $8200 so the resulting breakout move could be of the same height. The 100 SMA is above the longer-term 200 SMA on this time frame to indicate that the path of least resistance is to the upside or that a break higher is more likely to happen than a breakdown.

However, the gap between the moving averages is narrowing to signal weakening bullish momentum. Stochastic is also turning lower to reflect the presence of bearish pressure while RSI is treading sideways to signal further consolidation.

Liquidity is expected to dip as traders take time off during the Thanksgiving holidays. This could lead to more volatile moves on any announcements as even smaller positions could trigger large swings. With that, investors might think it prudent to book recent winnings instead of leaving it all on the line. 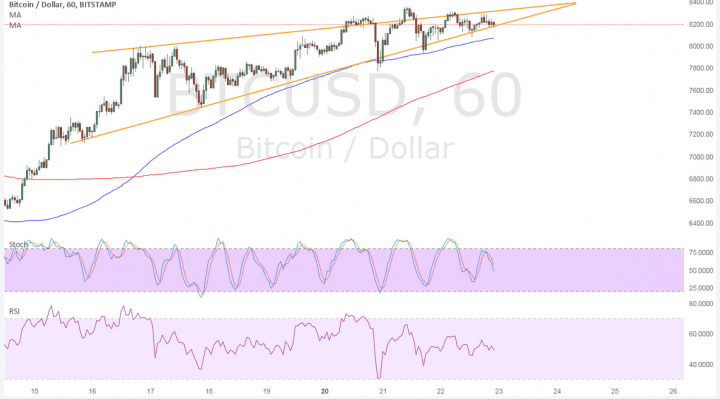 Meanwhile, the dollar is under pressure due to the slow progress in tax reform and weaker Fed inflation expectations. The FOMC minutes revealed that many policymakers worried that price levels could keep running below target longer than expected, which could mean a slower pace of interest rate hikes next year.

Bitcoin is waiting for more updates on the CME bitcoin futures launch, which the group earlier clarified has no set date yet as they are awaiting regulation. Any setbacks could lead to profit-taking on the recent rallies, which might then offer buyers a chance to join the climb at better levels.

Longer-term time frames show a bit of rally exhaustion for bitcoin as divergences are evident on the 4-hour chart. Price has formed higher highs while oscillators like stochastic and RSI are showing lower highs, hinting at a buildup in selling pressure.