Bitcoin is still hovering around an area of interest on the 1-hour time frame, waiting for bullish support. A bullish divergence can be seen as price made higher lows while oscillators made lower lows since November 21.

The 100 SMA is above the longer-term 200 SMA so the path of least resistance is to the upside, which means that the rally is more likely to resume than to reverse. The gap between the moving averages is also narrowing to signal weakening bullish momentum. Still, the 200 SMA held as dynamic support as it lines up with the former resistance at $8000.

Stochastic is moving up to indicate a pickup in bullish momentum while RSI is also heading north so bitcoin could follow suit. In that case, another test of the highs near $8400 could take place. 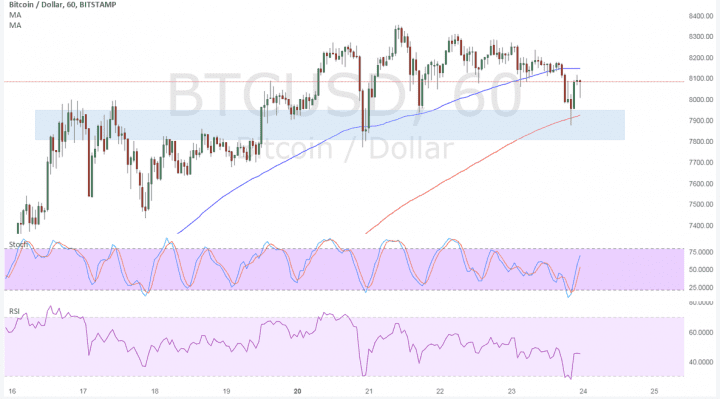 Traders are taking it easy over the Thanksgiving holidays as any announcements could spur a larger than usual reaction from bitcoin, owing to lower market liquidity. The focus appears to be on the CME bitcoin futures launch and the network acceptance of rival versions bitcoin gold and bitcoin cash.

The dollar is also on weak footing due to cautious Fed inflation expectations. Policymakers are worried that it would take longer for inflation to hit its target than previously expected, which suggests a slower pace of interest rate hikes next year.

At the same time, the slow progress on tax reform is keeping a lid on dollar gains. The next set of updates are likely to come out after the Thanksgiving break as Senators could vote on their version of the bill before merging with that of the House. There are significant differences between the two versions, though, so it could take beyond the end of the year to complete and implement.

Risk appetite is also dampening bitcoin gains as traders are able to score decent gains on higher-yielding assets like stocks and commodities.