Bitcoin has surpassed the $10,000 barrier and seems to be making a beeline for the full extension level at $10,473.80. Profit-taking is a strong likelihood at this level, possibly allowing for a retracement on the latest climb.

Stochastic has been indicating overbought conditions for quite some time, which means that buyers are already exhausted from the climb. RSI is in the overbought area as well but has yet to turn down to indicate a return in bearish pressure.

Meanwhile, the 100 SMA is safely above the longer-term 200 SMA on the daily time frame so the path of least resistance is still to the upside. This means that the rally is more likely to continue than to reverse.

A pullback from the climb could draw support from the ascending trend line connecting the lows since last month around $8000. Near-term support can also be found at the previous Fib extension levels. 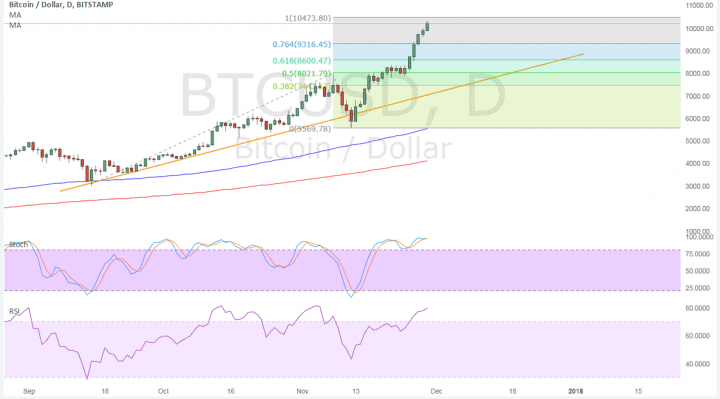 Rising volumes has been the main catalyst for the steep climb as Coinbase reportedly added 100,000 accounts leading up to the Thanksgiving holidays. This pickup in retail activity has pushed prices up, which has then led bulls to reestablish their long positions, thereby leading to more gains.

Geopolitical risk stemming from North Korea’s ICBM test this week also ramped up demand for bitcoin. After all, cryptocurrencies tend to benefit from risk-off flows as traders seek higher returns away from traditional assets like stocks and commodities.

The US dollar is still under a bit of pressure, although it has been able to rebound against its currency rivals this week. Progress on tax reform could shore up demand for the US currency but there are still several setbacks in Senate, not to mention the long process of merging its version with that of the House.

Looking ahead, anticipation for the CME bitcoin futures launch could also keep bitcoin price afloat, especially if an announcement comes before the end of the year.