Bitcoin looks eager to resume its climb as it bounced off the nearby ascending trend line support and area of interest. If bulls charge once more, bitcoin could head up to the 38.2% Fib extension at $10689.69 or the 50% extension near the record highs of $11000.

The 100 SMA is above the longer-term 200 SMA to signal that the path of least resistance is to the upside. The gap is pretty narrow, though, so the possibility of a new crossover isn’t off the table just yet. With that, a break below the latest correction and trend line could mark the start of a reversal.

Stochastic is crossing up to signal a return in bullish pressure, though, while RSI is also heading up without even hitting oversold levels. This signals that bulls are eager to get back in the game and push for more gains. 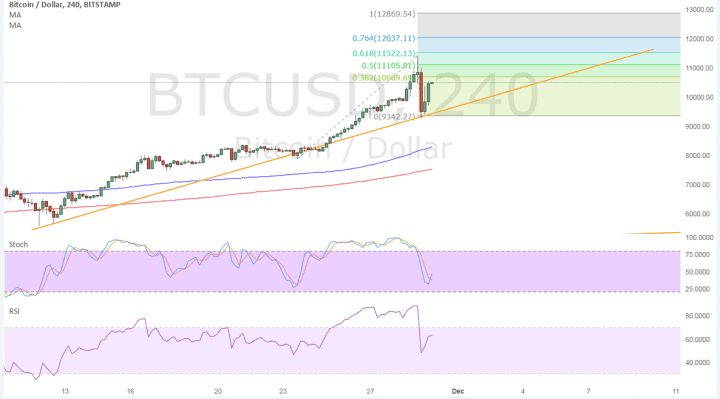 Retail activity and volumes have surged in the past few days as Coinbase reportedly added 100,000 accounts last week. Anticipation for the CME bitcoin futures launch possibly by the end of the year is also drawing more investor interest, although any roadblocks could lead to a larger pullback.

The dollar is trying to put up a fight and was able to gain support from several market factors recently, which explains the BTCUSD pullback. First off, the GDP reading for Q3 was upgraded from 3.0% to 3.3% then highlighted by Yellen’s optimistic tone in her testimony. Apart from that, the progress in Senate’s tax reform bill also proved dollar bullish.

Looking ahead, any setbacks to tax reform could mean profit-taking off dollar longs, probably drawing traders back to bitcoin once more. Geopolitical risk from North Korea has also resurfaced and heightened tensions could bring safe-haven flows to cryptocurrencies while traders also seek higher returns out of stocks and commodities.