Bitcoin is still trending higher inside its short-term and longer-term rising channel patterns and is currently testing support. A bounce could take it to the closest mid-channel area of interest around $6,700 or the middle of the longer-term range at the $7,000 major psychological mark.

However, the 100 SMA is below the longer-term 200 SMA to indicate that the path of least resistance is to the downside. In other words, support is more likely to break than to hold. In that case, a candle closing below the $6,400 support area could signal that bears are winning out.

Stochastic is heading north so price might still be able to follow suit while buyers stay in control. This oscillator has plenty of room to cover before hitting the overbought zone, so buying pressure could be in play for much longer. RSI is also pointing up without even reaching oversold territory, indicating that bulls are eager to charge. 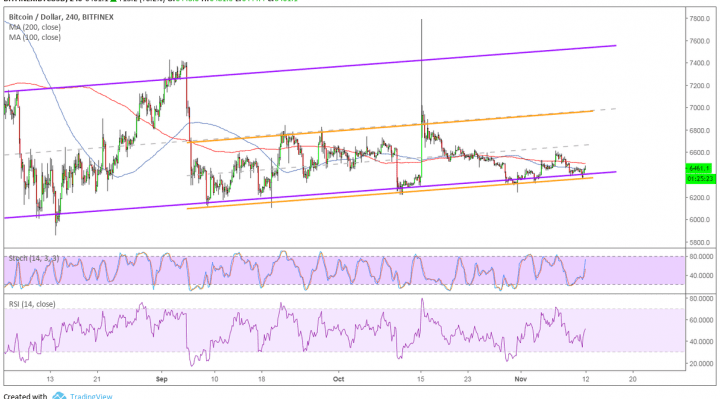 There is some uncertainty keeping traders on edge, particularly when it comes to regulatory action. For one, the SEC is cracking down on decentralized exchanges as part of its efforts to monitor ICOs for potentially fraudulent activity. This may have prompted the huge volumes of bitcoin holdings being moved from exchanges to various wallets as investors take precautionary measures themselves.

Apart from that, the SEC reportedly ended its public comment period on bitcoin ETF applications from VanEck and SolidX, which led many to think that a decision is due soon. Rejection could mean another blow to bitcoin and a dip in price, so it’s understandable that traders might be holding out for the announcement or easing up on their exposure until then.

With that, any major updates on these themes could determine whether bitcoin can sustain its uptrend or encounter another wave lower. Meanwhile, more focus on institutional investment could be bullish for bitcoin.