Bitcoin is still trying to stay above the support of its ascending channel on the 4-hour chart but is also stuck in a symmetrical triangle consolidation. Price could be due for a breakout soon as it approaches the peak of the formation.

The 100 SMA is below the longer-term 200 SMA to suggest that the path of least resistance is to the downside or that a move lower could be more likely than an upside break. In that case, bitcoin could be in for a reversal on its climb and drop by around the same height as the triangle pattern.

On the other hand, a move past the triangle top around $6,500 could be enough to signal that the uptrend is set to resume. This might take bitcoin to the top of the channel around $7,600 or the middle at the $7,000 major psychological mark.

Stochastic has room to climb before hitting the overbought zone so there may be some buying pressure left to push it higher. However, the oscillator is nearing the overbought zone to signal exhaustion among buyers and a possible return in selling momentum. RSI, on the other hand, appears to be turning higher even without hitting oversold conditions, indicating that buyers are eager to take over. 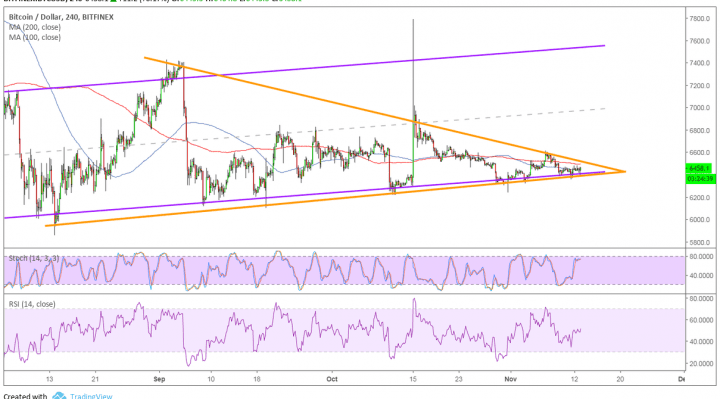 There seems to be some anxiety among investors on account of the recent SEC crackdown on ICOs, prompting many to move their holdings from exchanges to wallets. Apart from that, the update that the regulator has closed its public comment period on bitcoin ETF applications also keeps investors on edge about a decision anytime soon.