Bitcoin has formed lower highs and higher lows to trade inside a symmetrical triangle chart formation. Price is at the edge of this chart pattern so a breakout could be due anytime soon.

A candle closing past the $6,500 mark could be enough to confirm that bulls have won over and that further gains are in the cards. Meanwhile, a move below the $6,400 mark could signal that a downtrend is in the works. Whichever way bitcoin breaks out, price could be in for a rally or a selloff that’s at least the same height as the chart pattern.

The 100 SMA is below the longer-term 200 SMA to hint that the path of least resistance is to the downside or that support is more likely to break than to hold. Stochastic is pointing down also to indicate that selling pressure might return even without seeing overbought conditions. RSI, on the other hand, is heading up to signal that there’s some bullish pressure left. 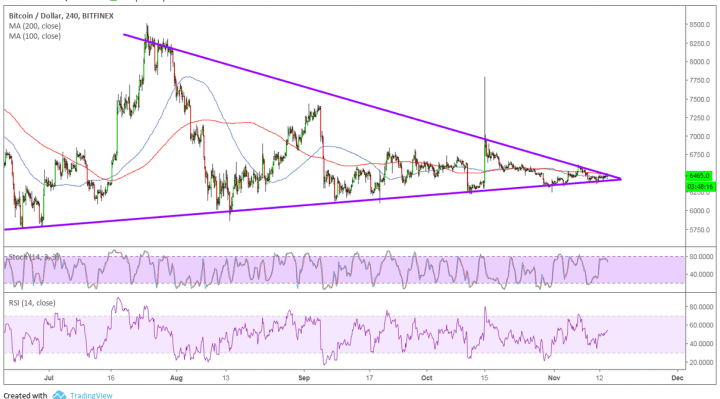 Bitcoin traders appear to be holding out for stronger directional clues as opposing forces are in play. Expectations for stronger institutional inflows are keeping prices supported but there has been a lot of risk-off action in financial markets these days.

Besides, there have been large volumes of bitcoin holdings being moved from exchanges to wallets as the SEC is cracking down on unlicensed decentralized exchange operations, prompting fears that a temporary shutdown could prevent withdrawal of funds. Traders are also waiting for the regulator’s decision on bitcoin ETF applications as they’ve recently ended the public comment period.

Several analysts still expect a big bull run in bitcoin to happen at some point, although there could still be some room for market dips, depending on the catalysts. Some say that continued declines in stocks or commodities markets on account of geopolitical risks could revive stronger demand for bitcoin and other cryptocurrencies.