Bitcoin broke below its symmetrical triangle consolidation to signal that a downtrend is underway, but price might still find support at the wedge. Recall that bitcoin is also stuck inside a falling wedge pattern seen on the daily time frame and it’s now down to the bottom.

A bounce off this area could take bitcoin back to the wedge resistance around the $6,000 level that lines up with the broken triangle bottom. If this holds as resistance, the downtrend might resume, but a break higher could signal that bulls are still stronger.

The 100 SMA is below the longer-term 200 SMA on this time frame, though, so the path of least resistance is to the downside. In other words, the selloff is more likely to resume than to reverse. In addition, the 100 SMA lines up with the wedge resistance to add to its strength as a ceiling.

RSI is still pointing down to signal that sellers have the upper hand, but the oscillator is dipping into the oversold region to reflect exhaustion. Turning higher could lead to a return in bullish pressure and a bounce for bitcoin.

Stochastic is also moving south and has some room to go before hitting the oversold levels to signal that sellers still have some energy left. A break below the wedge bottom could push bitcoin down by the same height as the chart patterns. 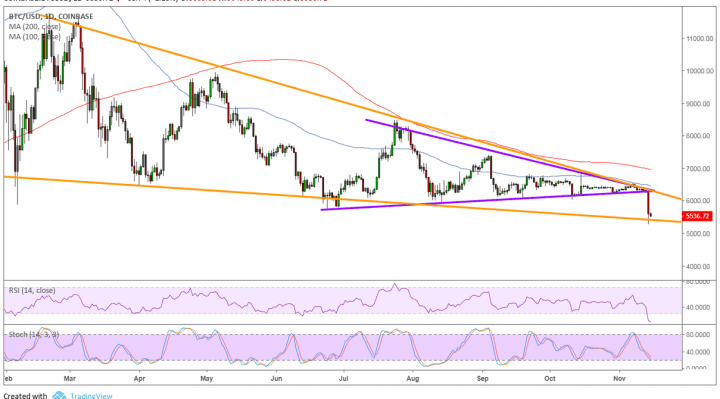 Bitcoin and its peers are all deep in the red on account of the uncertainty prevailing over the Bitcoin Cash hard fork. Although this likely does not directly affect bitcoin price, the “civil war” among developers raises concerns that similar issues could arise for other types of cryptocurrencies in the future.

Still, bitcoin has institutional inflows to look forward to early next year and it’s been proven that bulls defend major support zones by buying on dips. Whether or not this will still be the case this time remains to be seen.