Bitcoin is finding support around $5,200 after its recent tumble. This suggests that a bounce or pullback to the nearby areas of interest might take place from here.

RSI has hit the oversold region and is starting to turn higher, indicating that buyers may be regaining the upper hand. Stochastic is also pulling up after reaching the oversold area to signal a return in bullish pressure.

Applying the Fibonacci retracement tool on the latest swing high and low shows that the 61.8% level is close to a descending trend line connecting the highs on the 4-hour time frame. This also coincides with a former support around $6,000-6,050 that might now hold as resistance and is near the dynamic resistance at the moving averages.

On the subject of moving averages, the 100 SMA is below the longer-term 200 SMA to indicate that the path of least resistance is to the downside. In other words, the selloff is more likely to resume than to reverse. A shallow correction could already find resistance at the 38.2% Fib at $5,700 or the 50% level at $5,780. If any of these are able to keep gains in check, bitcoin could resume the drop to the swing low or lower. 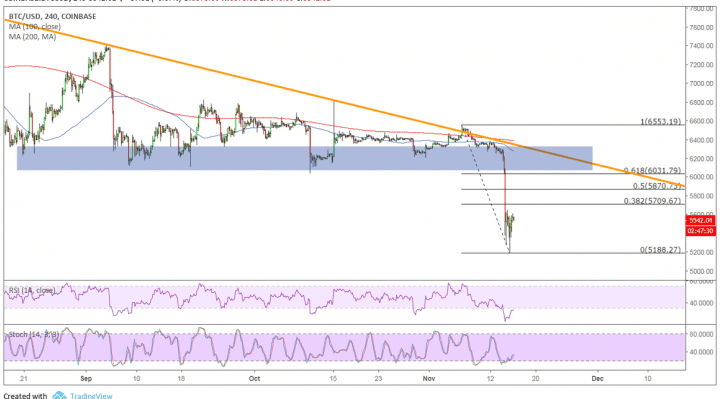 Bitcoin and its fellow altcoins are on shaky ground these days as investors have taken money off the table leading up to and after the Bitcoin Cash hard fork. This upgrade highlighted the potential risks to digital assets involving separate versions and the inability for the community to reach a consensus.

With that, some analysts are warning that it could take months before bitcoin is able to erase the latest slide. This kind of sentiment is encouraging more traders to liquidate their holdings and wait to buy at better prices instead. Still, there is some expectation of a big rebound by the end of the year or early next year on institutional inflows.