Bitcoin is still treading sideways since its sharp break below support around the $6,200 level. This suggests that a pullback may be in order or continuation could also be seen as the consolidation looks like a bearish flag.

Price is hovering around the 38.2% Fibonacci retracement level, which might already be enough to hold as resistance. If so, bitcoin could tumble back to the swing low or fall by the same height as the flag’s mast. This spans $6,400 to around $5,200, so bitcoin could fall to as low as $4,000 from here.

The 100 SMA is below the longer-term 200 SMA to confirm that the path of least resistance is to the downside or that the selloff is more likely to resume than to reverse. In addition, the moving averages line up with the broken support that might now hold as resistance.

Stochastic has some room to climb before hitting the overbought zone, which suggests that bulls could still have enough energy for some gains. However, the oscillator has made a downward crossover and could be ready to resume its move south from here, so bitcoin might follow suit. 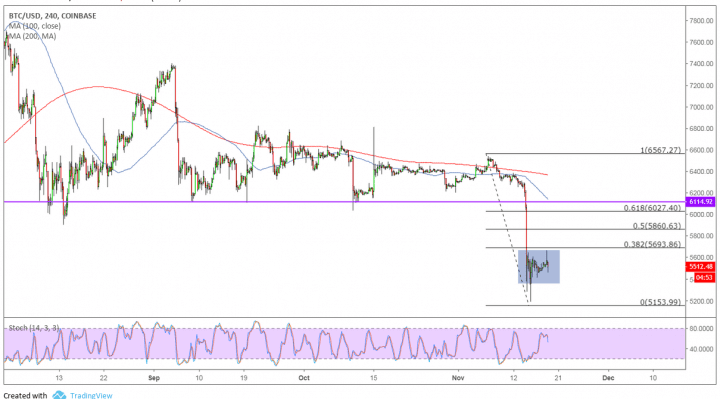 Sentiment in the cryptocurrency industry has taken a severe hit last week on the “mining war” resulting from the Bitcoin Cash hard fork. The community is unable to reach a consensus, keeping the future of this digital asset in the balance. Many worry that similar issues could arise from other altcoins, putting their values at risk as well.

Although bitcoin has institutional inflows to look forward to next year, some say that the recent selloff might dampen those volumes. A number of analysts already lowered their end-of-year forecasts for bitcoin, so it’s understandable that investors are lightening up on their positions, too. Some also pointed out that it would take months for bitcoin to recover from the drop in the past few days.