Bitcoin suffered yet another short-term breakdown, sending it to the very bottom of its longer-term wedge formation. A break below this support level could mean steeper losses for the cryptocurrency.

The 100 SMA is below the longer-term 200 SMA to confirm that the path of least resistance is to the downside. In other words, the downtrend is more likely to gain traction than to reverse as the gap between the moving averages is widening as well.

Stochastic was on the move up to signal the presence of buying pressure but it appears to be changing its mind halfway through. Turning lower signals a return in selling pressure that might be enough to break the channel bottom around $4,000.

Similarly RSI has just pulled up of the oversold region to suggest a pickup in buying momentum but has also backtracked this move. This hints that bearish momentum is unrelenting and the prevailing sentiment in the markets could be enough to sustain the slide. 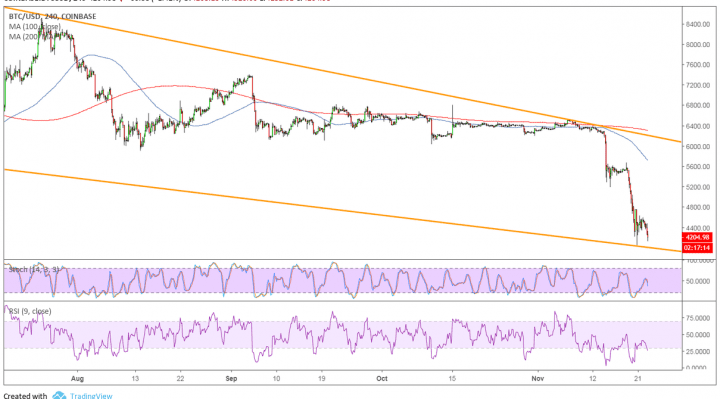 Analysts are already scaling their bullish bets for the coin as it would take months to recover from the drop if at all. This could also dampen investors’ sentiment, weighing on prospects of institutional inflows next year that are widely seen to be a catalyst for a big recovery.

The selloff was seen to have started on the uncertainty related to the Bitcoin Cash hard fork then accelerated by the SEC ICO probe. Traders had been moving funds out of exchanges onto wallets as precautionary measures but the moves likely led more traders to sell their holdings instead. To top it off, the thin liquidity over the Thanksgiving long weekend is also amplifying the declines.

In the absence of a catalyst that could inspire a turnaround, bitcoin could keep dropping with hardly any bottom in sight.