Bitcoin is still trending lower but has pulled up for a test of its descending trend line visible on the 1-hour chart. This falling resistance lines up with the 50% Fibonacci retracement level, which might keep gains in check.

If so, bitcoin could resume the drop to the swing low around $3,650 or lower. The 100 SMA is below the longer-term 200 SMA to confirm that the path of least resistance is to the downside. In other words, the selloff is more likely to resume than to reverse. The 100 SMA also lines up with the descending trend line to add to its strength as resistance.

RSI is also turning lower after recently hitting the overbought zone, indicating that selling pressure is returning. Similarly stochastic is topping out and is pointing south so bitcoin might follow suit. However, if buyers are able to wrestle through these bearish signals, bitcoin might have a shot at reversing from this slide. 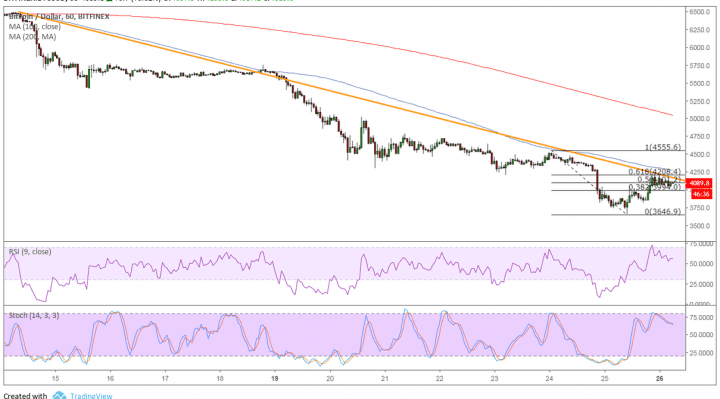 Bitcoin has had a rough couple of weeks and there seems to be no end in sight to this slide. Traders continue to dump their holdings for fear of further losses, and the selloff isn’t doing any favors for the institutional outlook either.

Keep in mind that many are hopeful that the influx of institutional investments next year could usher in a strong rebound for bitcoin, but the way prices are tumbling right now could wind up discouraging banks and funds from putting money in the industry. Then again, prices could hit a point where more buyers could be enticed to buy at bargain levels.

The prevailing risk-off mood in general financial markets owing to geopolitical risks from Brexit, Italy’s debt, the slump in oil, and resurfacing trade concerns are also dampening demand for assets like cryptocurrencies. Bitcoin would need a strong positive catalyst to end the rout.