Bitcoin has bounced off the area of interest at the top of the descending channel and is now down to the mid-channel area of interest. This lines up with the 50% Fibonacci extension level, which might keep losses at bay.

Stronger selling pressure, however, could take bitcoin down to the next extension levels. The 78.6% extension is at the $3,600 level then the full extension is closer to the channel support at $3,400.

The 100 SMA is below the longer-term 200 SMA to indicate that the path of least resistance is to the downside. In other words, the selloff is more likely to resume than to reverse. The 100 SMA is holding as dynamic resistance also and could continue to keep gains in check.

RSI is on middle ground but looks ready to move back south to signal a return in selling pressure. This could keep the downtrend going until the next downside targets. However, stochastic is heading north to signal that buyers are in control and might push for another test of the channel resistance at $4,000.

A break past this level could create a double bottom formation with the neckline at $4,200. A break past this could spur an uptrend that’s the same height as this potential reversal pattern, although bitcoin has the 200 SMA dynamic inflection point to contend with. 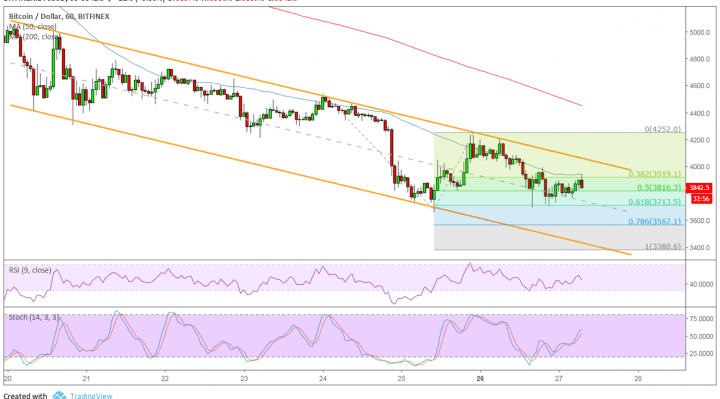 Cryptocurrencies are still in a rout and the fact that technical levels are holding suggest that buyers are quick about booking profits off bounces. Sellers are also just as quick to return and might accelerate the declines.

Bitcoin traders are waiting for a big development that could lead to a bottom and possibly sustain the climb. However, the much-anticipated pickup in institutional investment for next year might even be in jeopardy given the recent declines in prices.