Bitcoin could be due for a reversal from its earlier slide as a double bottom classic reversal pattern has formed on the 1-hour chart. Price broke above its descending channel top and is forming a bullish flag continuation pattern to hint that further gains are in the cards.

The 100 SMA is still below the longer-term 200 SMA for now so the path of least resistance is to the downside. Then again, the gap between the two is narrowing to suggest that bearish momentum is slowing.

RSI is turning lower from the overbought zone, though, which means that selling pressure is about to return. This oscillator has plenty of ground to cover before indicating oversold conditions, so bears could stay on top for a while. Similarly, stochastic is pointing down after recently reaching the overbought zone, also indicating a return in bearish pressure. 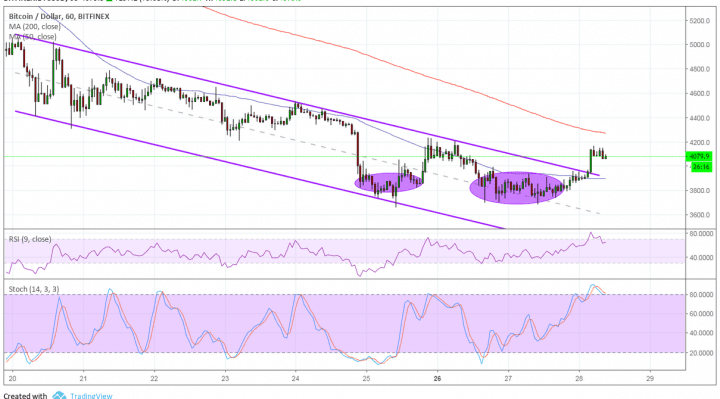 Even though the SEC noted that the lack of consumer protection measures means that their agency won’t be likely to approve a bitcoin ETF application anytime soon, bitcoin appears to have focused more on reports suggesting that institutions could push through with investments in the industry despite the bear market.

Bloomberg reported that Nasdaq will carry on with its bitcoin futures offering, which would make the cryptocurrency more accessible to more traders. This could prop up volumes and activity, thereby keeping prices supported as well.

Keep in mind that, although these updates were enough to create a bottom from the slide, bitcoin might need another set of positive developments to sustain any rallies and reversals.