Bitcoin was able to climb out of its descending channel on the 1-hour time frame to signal that a reversal from the short-term selloff is in the works. However, price hit resistance around $4,450 and might need to make a pullback to gather more bullish momentum.

Applying the Fibonacci retracement tool on the latest swing low and high shows that the 61.8% level is close to the broken channel top and the 100 SMA dynamic support. The 38.2% level lines up with an area of interest at the broken neckline of a double bottom and also the 200 SMA dynamic support. If any of the Fibs hold as support, price could recover back to the swing high and beyond.

The 100 SMA is below the longer-term 200 SMA for now, though, indicating that the path of least resistance is to the downside. In other words, the selloff is more likely to regain traction than to reverse. Then again, the gap between the moving averages is narrowing to indicate weakening bearish momentum and possibly a bullish crossover later on.

RSI is heading south so bitcoin could follow suit while sellers have the upper hand. Stochastic is also on the move down to confirm that bearish pressure is present and the correction could go on, but this oscillator is starting to dip into the oversold region already. This means that sellers are starting to feel exhausted and turning higher could encourage buyers to return. 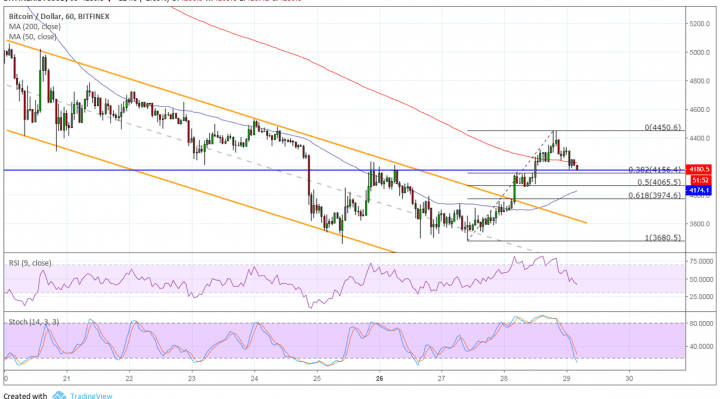 There has been some improvement in sentiment in the cryptocurrency industry lately on account of reports indicating that institutions are set to invest in the sector despite the bear market. This was also supported by confirmation that Nasdaq will carry on with offering bitcoin futures.

For now, these seem enough to have created a bottom for bitcoin and even overshadow SEC Chairman Clayton’s remarks on how they’re not likely to approve bitcoin ETFs anytime soon.