Bitcoin recently fell through the bottom of its symmetrical triangle to signal that a downtrend is underway. Price could slide by the same height as the chart pattern, which spans $6,200 to around $6,800. However, support at the $6,250 area appears to be holding, so a pullback may be in order.

Applying the Fib tool on the latest swing high and low shows that the 61.8% level lines up with the broken triangle support around $6,550. If this or any of the lower Fibs hold as resistance, bitcoin could fall back to the swing low or lower.

The 100 SMA is above the longer-term 200 SMA for now, indicating that the path of least resistance is to the upside. Then again, it could be that moving averages are still oscillating on range-bound conditions and have yet to catch up to the selloff. These dynamic inflection points are close to the broken triangle bottom as well, adding to its strength as potential resistance.

Stochastic is on the move down to show that sellers have the upper hand, but the oscillator is nearing oversold levels. This could be indicative of bearish exhaustion and a possible return in buying pressure. RSI is also in the oversold territory and could pull back up to indicate a bounce. 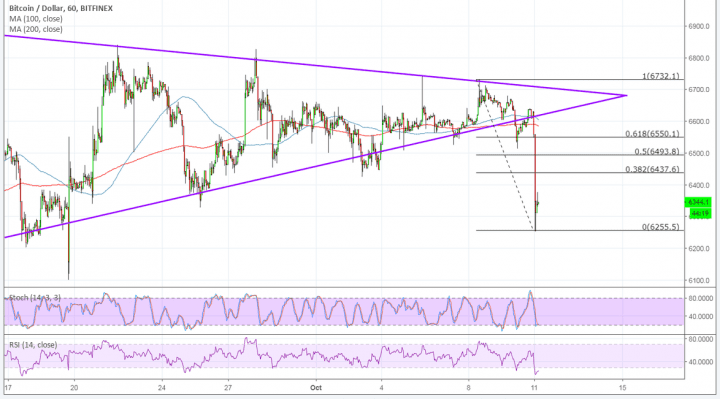 Bitcoin and its fellow altcoins have taken huge hits on the massive risk-off action in financial markets. Traders are reportedly reacting to the surge in US bond yields due to increased tightening expectations, thereby weighing on stocks, commodities, and cryptocurrencies.

Keep in mind that cryptocurrencies have already been on rocky ground after the IMF warned of cybersecurity risks related to cryptocurrencies and how regulators should step up their efforts. This also dampened hopes of seeing bitcoin ETF approvals from the SEC soon. Still, it’s worth noting how bulls continue to defend long-term support zones as many appear to be buying these dips.