Bitcoin was rejected on its test of the falling wedge resistance on its daily chart, setting its sights back on the bottom. The 100 SMA is below the longer-term 200 SMA on this time frame to confirm that the path of least resistance is to the downside, and the short-term moving average lines up with the wedge top.

Stochastic is also heading lower so bitcoin could follow suit while sellers have the upper hand. The oscillator has room to slide before reaching oversold levels, so selling pressure could stay in play for longer. Similarly RSI has some room to move south before reaching oversold levels, which means that bears could stay in control until the next support zone is tested.

Note, however, that the gap between the moving averages is narrowing to indicate slowing bearish pressure. Then again, these indicators might be catching up to the sharp selloff a bit late. 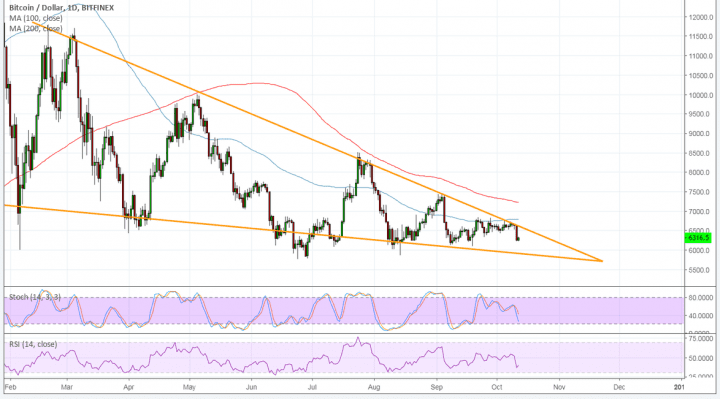 A combination of risk aversion in financial markets and regulatory developments in cryptocurrency weighed heavily on bitcoin and its peers for the latter part of the week. The SEC has been busy cracking down on ICO violations, leading traders to worry that the bitcoin ETF applications probably won’t be approved anytime soon.

There may have also been a lot of profit-taking leading up to Roubini’s testimony in Congress as he is known for his criticism of cryptocurrencies. His prepared speech was released earlier on and not surprisingly, it reiterated how bitcoin is in a bubble.

It would take a positive catalyst to keep bitcoin from falling further, although it’s worth noting how bulls have been staunchly defending the recent lows around $6,000. Then again, the lower highs suggest strengthening bearish energy as well, so this side might still have a chance at winning out in this long-term consolidation.