Bitcoin could be due for a reversal as it forms a double bottom on its 1-hour time frame after bouncing off the $6,500 level yet again. Price is on its way to test the neckline, and a break higher could push it up by the same height as the chart pattern, which is around $150 tall.

The 100 SMA is below the longer-term 200 SMA, though, so the path of least resistance is to the downside. In other words, the selloff is more likely to resume than to reverse. Then again, the gap between the moving averages is narrowing to reflect slowing bearish pressure.

Price has also closed above the 100 SMA dynamic inflection point to signal a pickup in buying momentum. If the 200 SMA dynamic resistance near the neckline keeps gains in check, another dip to the bottoms might be in the cards.

Stochastic is approaching overbought territory and might turn lower to indicate a return in in bearish pressure. RSI is already heading south after hitting the overbought zone, indicating that sellers have the upper hand. 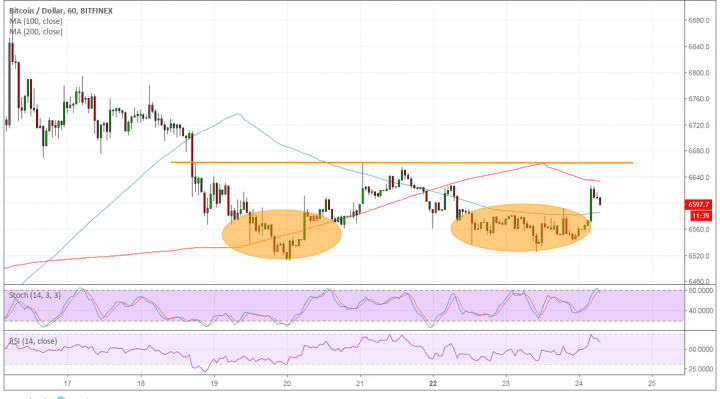 Still, bitcoin has a lot to look forward to, particularly the launch of ICE Bakkt bitcoin futures later in the year that has gotten the green light from the CFTC. This could bring a huge influx of volumes and activity, likely reviving more action for bitcoin again. Keep in mind, however, that CME bitcoin futures launched last year were being blamed for the massive drop that followed.

Some say that the approval from the CFTC hints that the SEC might also be more welcoming to bitcoin ETF applications pending their decision. Recall that the regulator has prolonged the comment period to weigh its decision further, keeping some hope alive that approval could still be possible later on.

Besides, the Fidelity institutional platform for bitcoin would draw more investments early next year as well.