Bitcoin recently fell through support around the $6,550 area and dipped to a low of $6,462.5 before bouncing. This might be a mere pullback from the drop, though, and the Fibonacci retracement tool on the latest swing high and low shows where sellers might be waiting.

Price is currently testing the 50% level which is close to the area of interest, but the line in the sand might be the 61.8% Fib at $6,563.8. The 100 SMA is below the longer-term 200 SMA to confirm that the path of least resistance is to the downside. In other words, the selloff is more likely to resume than to reverse. These moving averages could hold as dynamic resistance in the event of a larger correction.

Stochastic is still on the move up to signal that buyers have the upper hand. This could keep the correction going until overbought conditions are seen. RSI is just pulling up from the oversold region and has plenty of room to climb before buyers get exhausted. If any of the Fibs hold as resistance, price could fall back to the swing low or lower. 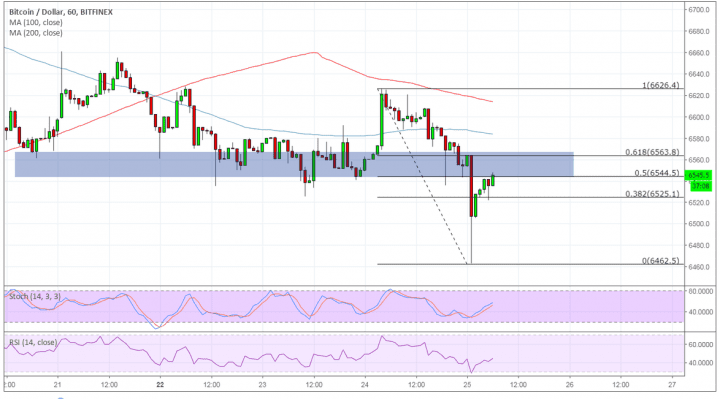 Traders still seem to be wary of bitcoin developments, although a couple of ones are likely positive. First is the launch of ICE Bakkt bitcoin futures in December, which has been green-lighted by the CFTC. Next is the Fidelity institutional platform for bitcoin and ethereum, which would likely usher in big inflows in early next year.

Of course there is still some degree of uncertainty tied to the SEC decision on bitcoin ETF applications, as rejection would mean a setback to the industry in terms of regulation. Approval, on the other hand, could accelerate potential rallies.

Keep in mind, however, that CME bitcoin futures have been blamed for the drop in bitcoin price late last year as this opened the cryptocurrency to short positioning.