Bitcoin continues to move sideways, finding support around $6,360 and resistance at $6,450. Price just bounced off its range resistance and looks prime for another test of support.

The 100 SMA is below the longer-term 200 SMA to confirm that the path of least resistance is to the downside. This could signal that there’s a possibility of support breaking, sending bitcoin lower by the same height as the chart pattern.

However, stochastic is already indicating oversold conditions and might be ready to turn higher to signal a return in buying pressure. This might allow support to hold and for bitcoin to move back to the range top or at least until the middle, which lines up with the area of interest at the moving averages. RSI is just turning a bit south after treading sideways to reflect consolidation action. 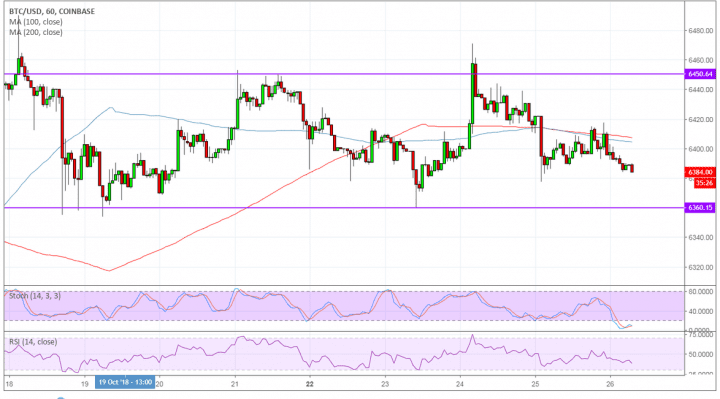 There have been several positive updates in the bitcoin industry but it seems that traders are holding out for bigger catalysts. First up is the upcoming launch of ICE Bakkt bitcoin futures, although it looks like market participants are torn on this one. After all, CME bitcoin futures have been blamed for the drop in price from record highs last year, so the pickup in volumes might be outweighed by risks from short positioning.

Next up is the pending SEC decision on bitcoin ETF applications. The latest memorandum from the regulator indicated that the newest commissioner was briefed on the matter, also acknowledging the presence of bitcoin derivative markets these days as compared to before.

Then there’s the launch of Fidelity’s institutional investment platform for bitcoin and ethereum, which could bring in huge inflows of funds from banks and institutions early next year. Many believe that this could usher in the much-anticipated rebound in bitcoin back to record highs and beyond.