Bitcoin could still have some hope on a rebound as price tests the bottom of a shallow ascending channel seen on the 4-hour chart. Price has formed higher lows but has previously found resistance at the mid-channel area of interest.

The 100 SMA is still above the longer-term 200 SMA, though, so the path of least resistance might be to the upside. In other words, the uptrend is more likely to resume than to reverse or support is more likely to break than to hold. Note that buyers have strongly defended the $6,000 support zone in the previous two dips.

RSI is also on the move up to signal that bullish pressure might be picking up. This could be enough to take bitcoin up to the top of the channel around $8,400 or the mid-channel area of interest again. Stochastic is also heading north so bitcoin could follow suit while buyers stay in control. A break below support, on the other hand, could mark the start of a prolonged slide. 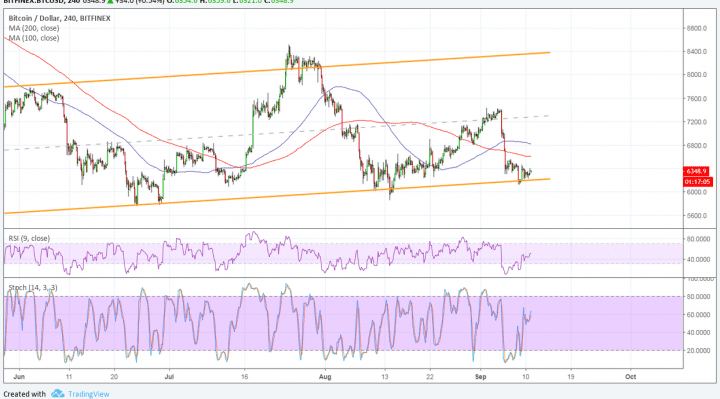 Keep in mind that bitcoin traders are still uneasy as they wait for the SEC decision on a number of bitcoin ETF applications. With the regulator’s latest trading suspension on a couple of crypto-based securities on account of confusion for traders when it comes to the related markets, investors are seeing lower odds of a bitcoin ETF approval later this month.

This could be a bigger catalyst for bitcoin, causing more losses and casting doubts on the narrative that a big rebound is poised to happen before the end of the year. There seem to be no other major events to watch out for, after all, although there’s no discounting that continued developments or another pickup in institutional interest could spur some rallies.