Bitcoin looks ready to confirm its double bottom reversal pattern on the short-term time frames, but there are still a few upside roadblocks. Price would need to close above the neckline at the $6,600 area to confirm that a climb is underway.

This happens to line up with the 200 SMA dynamic inflection point, which has held as resistance on the latest bounce. Rallying past this level could take bitcoin to the top of the triangle visible on the 4-hour time frame.

Since the 100 SMA is below the longer-term 200 SMA, the path of least resistance is still to the downside. In other words, selling pressure could still pick up from here and allow resistance to keep gains in check.

RSI is on the move up, though, so there might be some bullish momentum in play. However, the oscillator is nearing overbought levels to signal exhaustion and a possible return in selling pressure. Stochastic has a bit more room to climb before hitting overbought levels, which means that buyers have some energy left to push for gains. 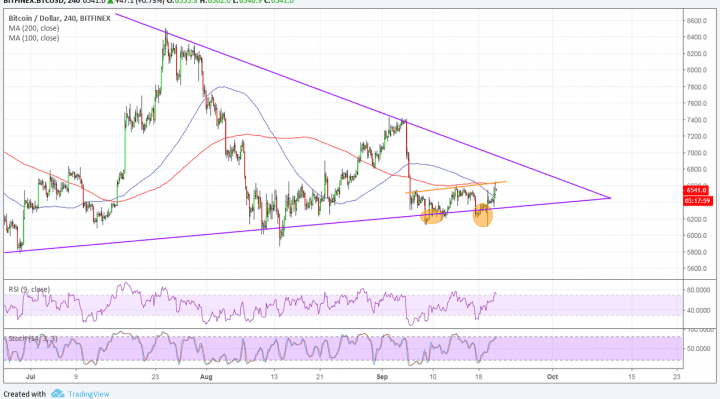 Bitcoin is currently drawing support from the SEC order to gather more input from the public as it moves closer to making a ruling on bitcoin ETF applications. In particular, it is gearing up to decide on the proposed rule change to list these instruments by the end of the month.

Recall that the regulator already pushed its ruling deadline back in August and may decide to do so again, postponing their decision until February next year. If so, bitcoin could encounter some profit-taking and hit the sell orders that had been accumulating.

On the other hand, approval could mean strong gains for bitcoin, possibly reviving expectations that a strong rebound would take place before the year ends.