Bitcoin is still stuck inside its descending triangle pattern on the daily time frame after getting rejected on a test of the top. The 100 SMA lines up with the triangle resistance, adding to its strength as a ceiling and pushing price back on track for a test of support.

The short-term moving average is also below the longer-term 200 SMA to confirm that the path of least resistance is to the downside. In other words, the selloff is more likely to carry on than to reverse. Support might even be more likely to break than to hold.

Stochastic is also pointing down after briefly spending some time in the overbought region. This suggests that selling pressure is picking up, also adding confirmation that a breakdown might be in order. In that case, bitcoin might slump by the same height as the chart pattern, although that could bring its value to nearly zero. RSI appears to be crawling higher but is also starting to head south to signal that sellers are regaining the upper hand. 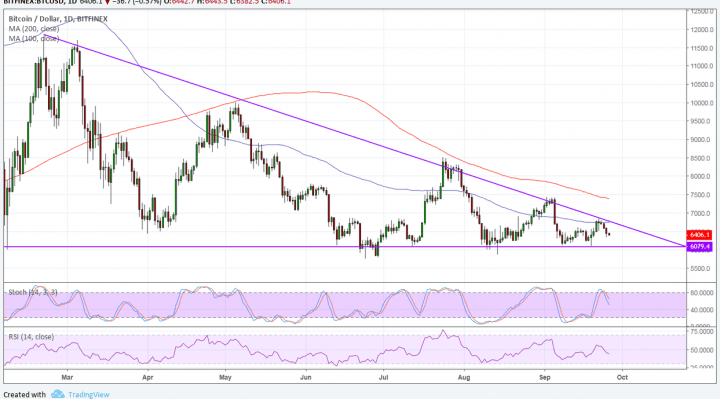 Bitcoin was hit by news that the trustee for Mt. Gox sold $230 worth of bitcoin and Bitcoin Cash from March 18 to June 22 as part of its efforts to pay back creditors. Many speculate that there’s much more bitcoin in the trust and the dumping would likely put more downside pressure on prices.

On a positive note, Google will reportedly lift its ban on bitcoin and ICO ads by October, which could bring in stronger public interest by then. Recall that the search engine banned these from its platform in order to protect consumers from potential fraud. Facebook has also lifted its ban, adding to potentially higher volumes and activity in the space. Note, however, that Google will approve ads only from regulated entities in the US and Japan.