Bitcoin had lower highs and higher lows inside a symmetrical triangle consolidation pattern on its 4-hour chart. Price just busted through the resistance around $6,700 to signal that an uptrend is about to happen.

However, the 100 SMA is still below the longer-term 200 SMA to indicate that the path of least resistance is to the downside. In other words, price could still slump back inside the triangle to continue its consolidation if the break is a fake out.

Also, stochastic is dipping into the overbought region to reflect exhaustion among buyers. Turning lower could reflect a return in selling pressure and a likely dip in price, possibly back to the broken triangle top or all the way down to the bottom around $6,400. RSI has some room to climb, though, so there might be a few more gains up bitcoin’s sleeve before overbought conditions are seen. 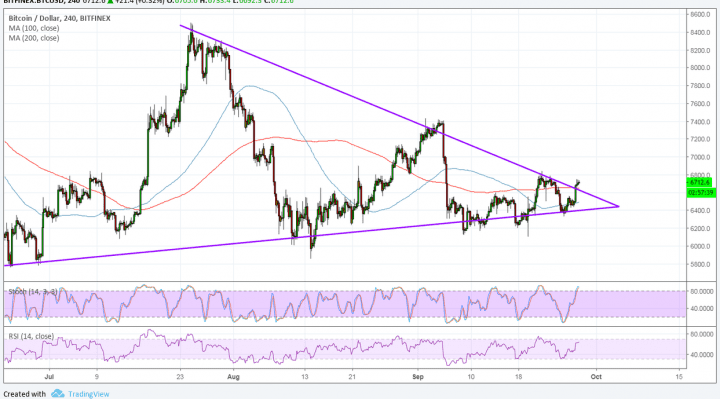 Bitcoin has had a handful of positive updates in the past few days, possibly enough to keep sentiment positive and allow a rebound to gain traction. For one, Google will be reversing its ban on bitcoin and ICO ads on its platform, following a similar move by Facebook in June.

However, the search engine will only approve ads from regulated companies targeting audiences in the US and Japan, likely because regulation has made significant strides in those countries. Not only will this revive interest from the general public but represents a nod of approval and a thumbs-up in consumer protection in these markets.

Bitmain has also filed for an IPO in the Hong Kong Stock Exchange and released its financial statements in the process. Revenue and profit growth have been nothing less of exponential so it’s understandable that investors are rushing in. Going public, after all, could mean more upside for the Chinese bitcoin mining giant.