Bitcoin continues to climb and might be setting its sights on the top of the ascending channel on the daily time frame. Price is currently at the mid-channel area of interest, still deciding whether to break higher or to make another test of support.

Signs of exhaustion are seen as stochastic is indicating overbought conditions, which means that buyers might need to take a break and sellers take control of price action. However, the oscillator has yet to move below the overbought area to indicate a return in selling pressure before this happens. On the other hand, RSI is still climbing, which means that there’s still some buying momentum left that can take bitcoin up to the resistance close to the $1400 level or at least until the record highs at $1300. 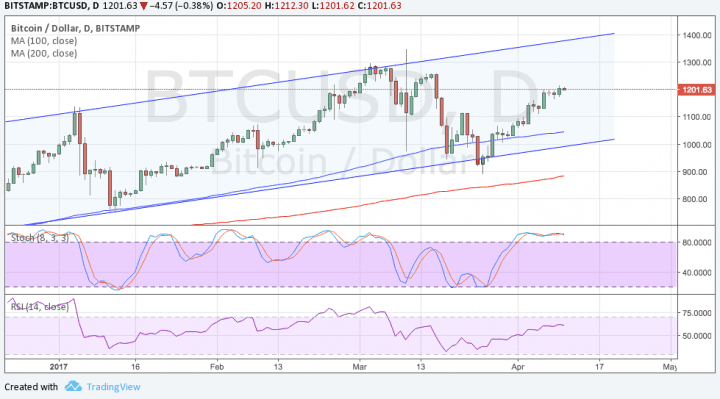 The 100 SMA is above the longer-term 200 SMA so the path of least resistance is to the upside. In other words, the uptrend is more likely to continue than to reverse. The gap between the moving averages is also sufficiently wide so there may be no new crossovers in a while. The 100 SMA is close to the channel support at $1000-1050, adding to its strength as a floor in the event of a pullback.

Geopolitical tensions continue to keep bitcoin price supported as investors remain on edge about the potential impact of more attacks on the financial markets. Just recently, the chemical attack in Syria prompted a military reaction from the US and traders are on the lookout for any signs of retaliation from either side. If this keeps up, risk aversion could extend its stay and lead to more jitters in stocks, commodities, and currencies. In these scenarios, bitcoin price is usually able to take advantage from outflows off traditional financial markets among traders seeking higher returns.

Apart from that, the lack of negative updates on the network hard fork continues to draw more investor activity towards bitcoin. The cryptocurrency is also in the process of erasing its losses from earlier in the year when regulatory changes in China spooked investors. Moving forward, should these themes continue to stay in play, traders could keep piling funds on bitcoin.

Keep in mind, however, that liquidity is expected to be thinner in the next few days as several markets will be closed during the Holy Week holidays. This means that headlines could trigger larger price reactions from even small positions.