Bitcoin remains on its long-term ascending channel, setting its sights on the resistance or the record highs around $1300. Price is currently consolidating in a short-term rising wedge formation and could be due for a breakout soon.

A break lower could mean a short-term selloff for the asset, possibly taking it back down to the ascending channel support at $1000 or until the area of interest around $1100. The moving averages are making a new upward crossover to indicate a pickup in buying pressure. This means that a break higher could have a higher probability.

However, stochastic appears to be pointing down to suggest that bears are taking control of bitcoin action. RSI is also turning lower so BTCUSD might follow suit. In any case, the nearby moving averages could also hold as dynamic support. But a break below the long-term channel bottom at $1000 could mark the start of a selloff. 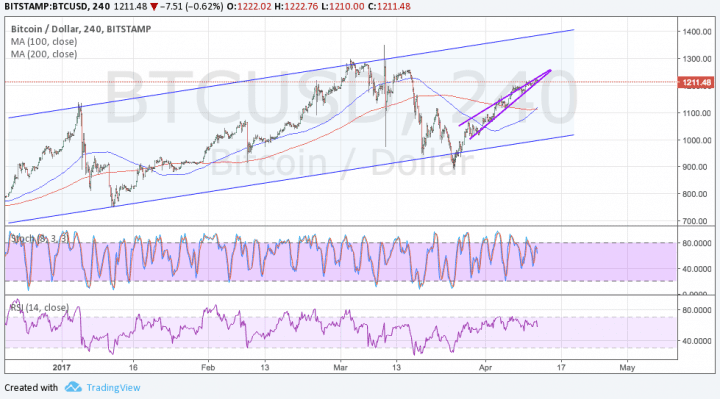 Market factors are mostly in support of bitcoin price still, as a combination of geopolitical risks and renewed confidence in the cryptocurrency are keeping losses in check. For one, there are tensions in the Middle East that are leading investors to either transfer money to safe-havens or to seek higher returns in non-traditional financial markets like bitcoin.

Meanwhile, Japan’s recent decision to recognize bitcoin as a legal means of payment and speculations that Russia might also do so by next year also led to a fresh set of gains for the cryptocurrency. This follows easing concerns of incompatibilities that may arise from the network hard fork, as developers have agreed to merge existing versions of the software by July 4 to ensure that stability is maintained.

As for the dollar, weakening expectations of tax reform from the Trump administration materializing this year have eroded gains for the stock market and bond yields. This has led to weaker demand for the dollar, something that bitcoin has been able to take advantage of.

Moving forward, headlines on geopolitical risks and US policy could impact market sentiment and therefore bitcoin movement. Note, however, that thinner liquidity during Holy Thursday and Good Friday in several markets could lead to higher volatility, allowing smaller positions to cause larger moves in the market as usual. Profit-taking before the markets close for these days could also lead to quick reversals for bitcoin.