Bitcoin recently broke below the rising wedge formation visible on its 1-hour chart, signaling room for further losses. This wedge formation is around $300 tall so the resulting selloff could be of the same size.

The 100 SMA is still above the longer-term 200 SMA on this time frame so the path of least resistance could be to the upside. However, bitcoin price already dropped below both moving averages to indicate a surge in selling pressure so a downward crossover might be due soon. In that case, sellers could gain more energy and push for more losses.

Stochastic is turning higher, though, indicating that there may be some buying pressure in play. In that case, a pullback to the broken wedge support could happen before the selloff resumes. RSI Is also indicating oversold conditions, which means that sellers might need to take a break and let buyers take over. If bullish momentum is strong enough, a move back above the wedge resistance at $1250 could happen and take bitcoin back to its record highs. 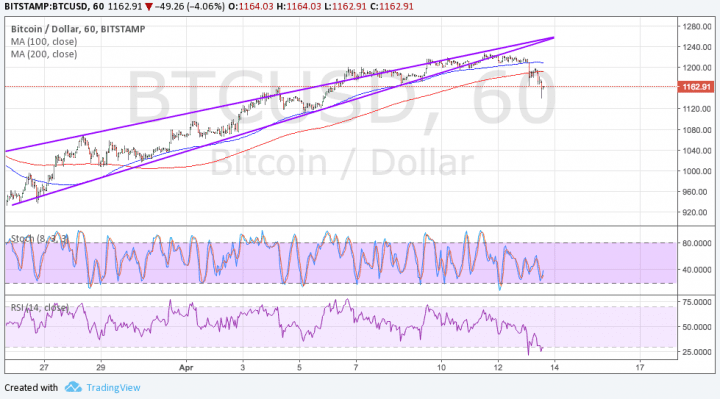 A bit of profit-taking seems to be in play as traders might be liquidating positions ahead of the Holy Week long weekend. In addition, reports that a bill to regulate bitcoin in Washington is making progress could lead some firms to move operations out of the state. Digital currency exchanges such as Bitfinex, Bitstamp and Poloniex moved out of Washington recently in anticipation of difficulties with this strict regulatory environment.

“A licensee transmitting virtual currencies must hold like-kind virtual currencies of the same volume as that held by the licensee but which is obligated to consumers in lieu of the permissible investments required in of this subsection,” the bill states. In addition, other requirements on mandatory third-party cybersecurity audits of “all electronic information and data systems” could be put in place.

Aside from that, bitcoin gave back a bunch of its recent gains when a Russian central banker mentioned that bitcoin legalization is not guaranteed. Maxim Grigoriev, head of the Bank of Russia’s Center for Financial Technologies, said that it’s still too early to discuss legally recognizing bitcoin. “We are communicating with the Ministry of Finance, Federal Financial Monitoring Service – as mentioned, we are going to 2018 to determine the position,” he said.

This follows recent bitcoin gains on reports that a senior official with the Russian Ministry of Finance brought up the idea that bitcoin could be legally recognized by next year, also coming after news that the Japanese government has decided to declare bitcoin as legally accepted currency.