Bitcoin seems to be tired from its climb as price is forming a head and shoulders pattern visible on the 1-hour chart. Price has yet to break below support at the $1150 area before confirming the potential reversal.

If that happens, bitcoin could fall by around $70 or the same height as the chart formation. On the other hand, if support holds, price could bounce back up to the highs at $1220 or higher.

The 100 SMA just crossed below the 200 SMA to signal that the path of least resistance is to the downside. In addition, the moving averages could hold as near-term resistance in the event of a pullback. Stochastic is still heading up, which means that there’s some buying pressure left.

RSI is also pointing up and has plenty of room to go north so bitcoin price could follow suit. However, both oscillators are already nearing overbought conditions and turning lower could draw more sellers to the mix. 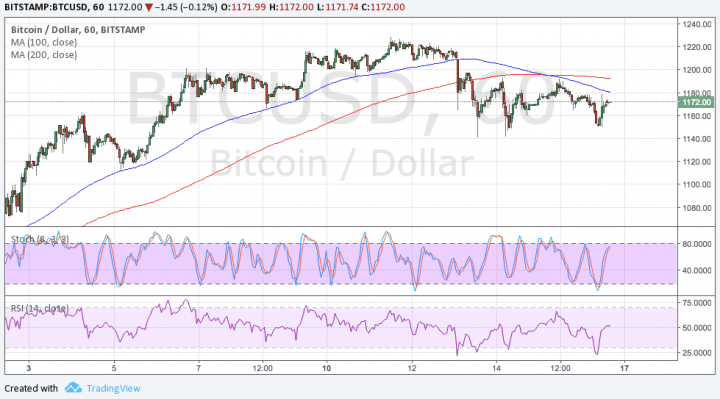 Persistent geopolitical risks, particularly in the Asian region this time, continue to keep bitcoin supported against most other financial assets that typically weaken in times of risk aversion. A bunch of markets are still closed for the holidays until Easter Monday in Europe so low liquidity could be a recipe for more volatile bitcoin price action.

Given the current market sentiment, bitcoin could be sensitive to headlines that might influence risk flows throughout the week. There’s not much in the way of top-tier reports from the US economy so BTCUSD could take its cue from overall sentiment.

Zooming out to longer-term time frames reveals that bitcoin is currently encountering a ceiling at an area of interest around $1200 and appears to be turning lower. It has also broken below an ascending trend line connecting the lows since the start of April, signaling that bearish momentum is in play. Stronger declines could take bitcoin back down to the lows around $900.

On the other hand, a strong return in buying pressure could lead to a test of the record highs or perhaps even the creation of new ones. Note that other factors supporting bitcoin include the progress in the network hard fork and the acceptance of Japan for bitcoin as a legal form of payment.