Bitcoin recently consolidated inside a symmetrical triangle pattern as it formed higher lows and lower highs. Price eventually broke to the upside of the chart formation, signaling that buyers are taking control from here.

The chart formation is around $1140 to $1190 so the resulting rally could last by around $50 or higher. However, the 100 SMA is below the longer-term 200 SMA to signal that the path of least resistance is to the downside. In addition, the 100 SMA lines up with the triangle resistance while the 200 SMA is holding as dynamic resistance at the moment.

Stochastic is heading up so bitcoin price might follow suit but the oscillator is nearing the overbought area to suggest that bulls are tired and that bears could take over soon. In that case, a pullback to the broken triangle resistance around $1170 could happen before bitcoin resumes its climb. RSI already appears to be turning lower to indicate that sellers are already regaining the upper hand. 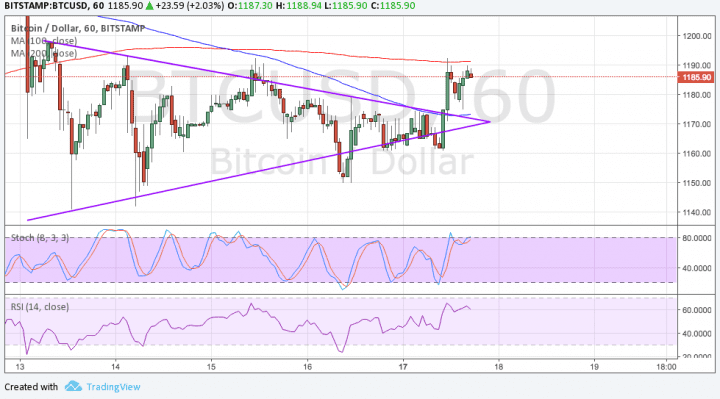 Fundamental factors continue to support bitcoin these days, starting from geopolitical risks in North Korea and Syria and moving on to the upcoming French elections. Although most investors had been particularly concerned about a Le Pen victory since she has campaigned for a Frexit, other candidates such as Fillion appear to have similar ideas in mind. In that case, the existence of the shared currency could be at risk during some point and lead investors to store their funds elsewhere.

In India, the recent demonetization appears to have been resolved but ATMs are reportedly running out of cash so people are in search of other ways to pay for goods and services. This is reminiscent of capital controls in Greece back when the bailout program was in question, leading businesses and individuals to make use of alternative ways to transfer or store value like bitcoin.

There’s not much in the way of top-tier data from the US these days and the uncertainty surrounding the Trump administration has also discouraged traders from putting money in the dollar. With that, bitcoin could continue to gain ground on risk aversion and other headlines that could mean more risks for the financial markets. Besides, the lack of updates on increased regulation from China or any complications from the network hard fork has also been deemed positive for bitcoin, but do stay on the lookout for any headlines that could suggest otherwise.