Bitcoin just recently broke past the resistance of a small symmetrical triangle pattern, signaling its intention to head further north. This could take it up to the resistance around the 1300 area or even to new record highs if bullish pressure is strong enough.

On the 4-hour chart, the 100 SMA is above the longer-term 200 SMA so the path of least resistance is to the upside. In other words, the climb is more likely to carry on than to reverse. Also, the 100 SMA lines up with the short-term triangle bottom, adding to its strength as a floor. A larger pullback could also find support at the 200 SMA dynamic inflection point.

Stochastic is on the move up but is already indicating overbought conditions. This means that buyer are about to be exhausted and might let sellers regain control of bitcoin price action. In that case, price could retreat to the broken triangle resistance for a quick pullback or all the way down to the 200 SMA at 1100 for a test of the area of interest. 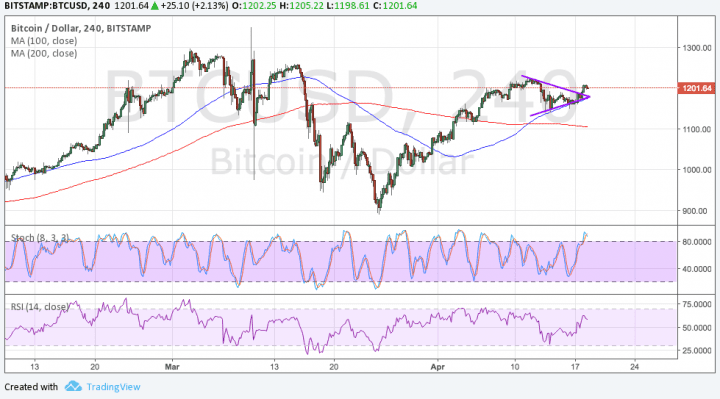 RSI is on its way up but appears to be changing its mind and thinking of heading south so bitcoin might follow suit. Stronger selling pressure could spur a break below the 1100 area of interest and a move towards the 1000 psychological level.

So far, geopolitical risks and political uncertainty are dampening gains in global financial markets. In the past few weeks, market watchers had been paying close attention to tensions in North Korea and Syria, as well as US military intervention. This time around, the focus is shifting to the upcoming French presidential elections and the UK snap elections just recently called by UK Prime Minister Theresa May.

Note that the UK government has already officially invoked Article 50 or the start of the Brexit process so there’s no backing out of negotiations. However, having someone new at the helm could complicate matters from here as they could go for a different strategy and trigger a hostile response from EU officials.

As for bitcoin itself, the lack of negative news on the hard fork or on stricter regulations has allowed the cryptocurrency to stay afloat. Besides, reports that Japan has accepted bitcoin as a legal form of payment and rumors that Russia might follow suit also boosted confidence in the cryptocurrency.