Bitcoin appears ready to resume its climb as price could be forming an ascending channel pattern on its 1-hour chart. Price is currently testing support around 1200 and could be due for a move past the record highs onto the 1300-1350 area.

The bottom of the channel lines up with the 100 SMA, adding to its strength as a floor. A larger correction could last until the 200 SMA dynamic inflection point but a break below this area could draw more sellers to the mix. Still, it’s worth noting that the gap between the moving averages is getting wider to reflect a pickup in buying pressure.

Meanwhile, stochastic is on its way down to show that sellers are regaining control of price action. A move below the Fib levels around the 1100 area could be enough to confirm that bearish momentum is in play. RSI, on the other hand, appears to be heading up to show that buyers still have enough energy to push for a rally or at least a test of the mid-channel area of interest around 1225. 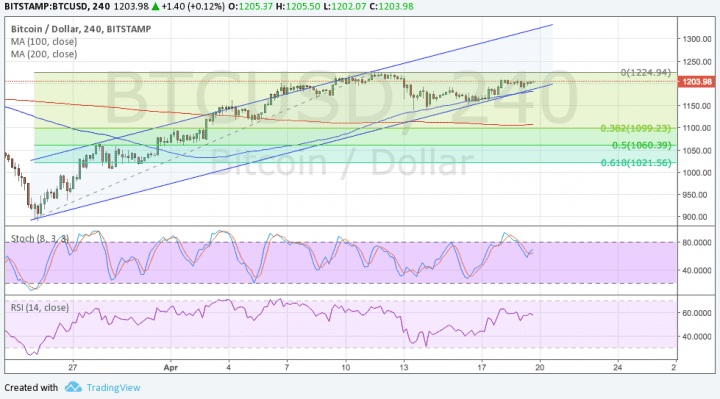 Market factors continue to show support for bitcoin as global uncertainties, particularly involving the political landscape in Europe, are leading traders away from traditional assets like stocks or currencies and towards the higher-yielding bitcoin.

However, news that Chinese exchanges are starting to halt US dollar deposits and transfers is reminding traders of the ongoing crackdown by regulators. Earlier this year, these headlines were enough to lead to large swings in bitcoin price so any decisive action by Chinese authorities could be enough to push bitcoin sharply lower.

“Starting from today (April 18, 2017), OKCoin would temporarily suspend USD deposit because of the issues with intermediary banks. Please do not make further deposits because your wires may be rejected by intermediary banks. We are actively looking for alternatives to resume deposits as soon as possible. Your current account balance remains unaffected. We are sorry for any inconvenience caused.” a notice posted on the exchange’s website stated.

What makes investors wary that this is a result of government intervention is that it follows Bitfinex’s announcement and a recent “upgrade” on withdrawal systems that prevented liquidation of bitcoin and litecoin holdings. With that, bitcoin is being pushed and pulled by opposing forces, which explains the recent consolidation. A short-term break could be enough to confirm which direction it might take from here.