Bitcoin seems to be showing some signs of rally exhaustion but zooming out to the longer-term charts shows that the uptrend is still intact. Price is trading inside an ascending channel formation visible on the 4-hour time frame and could have its sights set on the resistance at $1400.

The 100 SMA is above the longer-term 200 SMA so the path of least resistance is to the upside. In addition, the gap between the moving averages is widening to reflect stronger bullish momentum. The 100 SMA is also holding as near-term dynamic support and might be enough to keep losses in check, although a larger dip could last until the 200 SMA dynamic support around the mid-channel area of interest at $1200.

Stochastic is on the move up to indicate that buyers are in control of price action but the oscillator is nearing the overbought zone to suggest rally exhaustion. RSI is also turning lower so bitcoin price might follow suit if sellers take over. A pickup in selling pressure could lead to a test of the channel support at $1050-1100. On the other hand, a move past the recent highs could spur a jump up to the channel resistance. 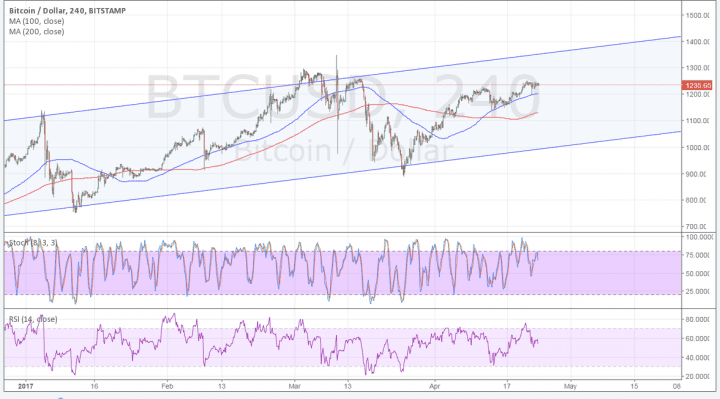 Risk appetite appears to be returning to the financial markets now that the first round of French elections is over and it will be Macron versus Le Pen in the next round. For many analysts, this signals that Macron has the edge and will likely take the victory over Le Pen, reducing odds of a Frexit. Still, a lot could happen in the next few weeks so there’s no dismissing the idea that additional uncertainty could materialize and boost bitcoin once more.

Meanwhile, geopolitical risks are still lingering over the financial markets, also presenting some upside for bitcoin. As for the dollar, upcoming event risks include the release of the US advanced GDP reading for Q1 2017 and a downbeat result could mean more losses for the US currency. Market watchers appear to be on the lookout for new actions from the Chinese government as a number of firms have halted US dollar deposits recently.